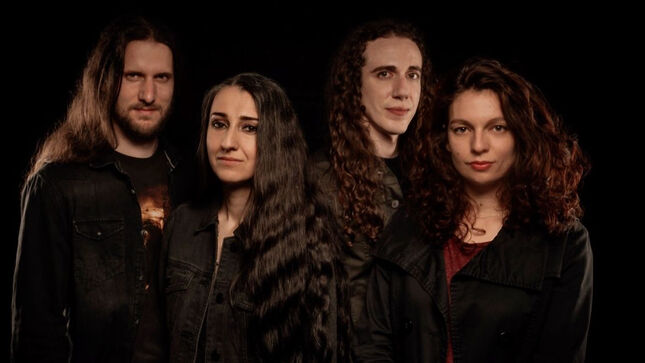 Starting out as an unbelievably successful DIY ride that suddenly turned towards international acclaim, the indisputable Aephanemer is one of the most exciting melodic death metal sensations of the modern age. Fast-paced metal fronted by the guttural growls and fierce screams of extraordinary vocalist Marion Bascoul meet flickering twin leads, elements of Scandinavian death metal, Slavic traditional music and epic synths. If Prokopton was a noteworthy, impressive sophomore album from one of Europe’s best up and coming melodic death metal bands yet, A Dream Of Wilderness sees the French four-piece doubling down on its songwriting skills: Faster, tighter and heavier, Aephanemer’s upcoming album unleashes an anthemic adventure of brutally fast riffage and epic melodies.

As today’s first single release proves, A Dream Of Wilderness promises to be an exciting and refreshing mixture of metallic elements that are both technically superior and emotively rousing. “Panta Rhei” showcases the band’s ability to combine blistering, speedy riffs with a thrilling symphonic sound that takes you on a journey right into a melodic death metal fairy tale.

Aephanemer says: "We are more than happy to finally unveil our new song and video: 'Panta Rhei'! We are very excited as it is the very first glimpse at our new album, A Dream of Wilderness, to be released on November 19, 2021 through Napalm Records! We hope you will like it!"

Watch the video for "Panta Rhei” below.

Aephanemer doesn’t seem to fear boundaries. Their new album delivers a wide metal range that represents a dark and gloomier yet no less powerful side of the band, while otherworldly dimensions of blast beats, furious riffage and heavy, razor-sharp death metal anthems will have you headbanging as fast as you can. Especially in this day and age of staying "true" and limited within a sound and scene, A Dream Of Wilderness is a welcome diversion and a brave record artfully blending brutally fast symphonic death and raw melodic metal into a multi-faceted epic!

The record was mixed by Dan Swanö at Unisound AB, and mastered by Mika Jussila at the Finnvox Studios.

A Dream Of Wilderness will be available in North America in the following formats:

A Dream Of Wilderness tracklisting: