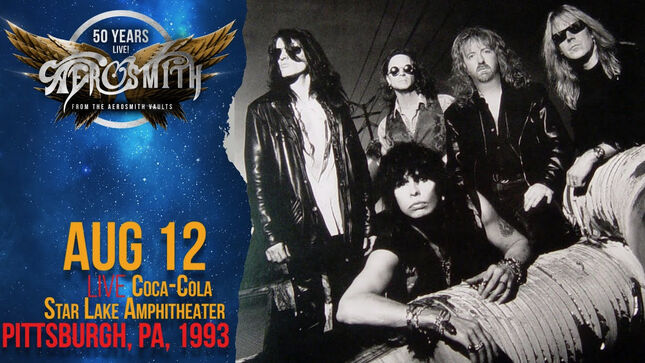 Available now is Live From Coca-Cola Star Lake Amphitheater, Pittsburgh, PA (1993). Filmed live at The Coca-Cola Star Lake Amphitheatre on July 2, 1993 during the Get A Grip Tour, Aerosmith continues to be an unstoppable force rock, delivering a high energy set with all the same swagger and attitude they had from day one. The tightly knit band belts out classics such as “Eat The Rich,” “Janie’s Got A Gun,” “Livin' On The Edge” and “Cryin'.” Unearthed from Aerosmith’s legendary archive for the very first time and remastered in HD from the original master tapes.

For five consecutive weeks, Aerosmith’s official website and YouTube channel will premiere a different concert every week from each decade. With each show, the band’s official online store will also feature a new collection of exclusive merchandise capsules celebrating each decade. Head here.

Aerosmith are set to return to Las Vegas to bring their critically acclaimed residency, Aerosmith: Deuces Are Wild to the Dolby Live at Park MGM.  Kicking off September 14 - with shows running through December 11 - the residency is the first live concert experience presented in Dolby Atmos® at Dolby Live. Dolby Live is one of the world’s most technologically advanced performance venues for enjoying live music in Dolby Atmos. Tickets can be purchased online at ticketmaster.com/aerosmith.

In addition to their upcoming dates in Las Vegas, Aerosmith is set to perform at Maine Savings Amphitheater in Bangor, Maine on September 4 before they head to Boston for a show at the historic Fenway Park on September 8.  For ticket information, visit Aerosmith.com.