AEROSMITH – STEVEN TYLER Out Of Rehab And Doing “Amazingly Well” 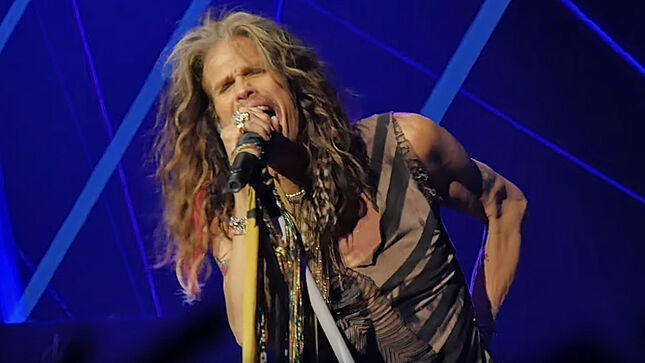 Steven Tyler is out of rehab reports TMZ.

The 74-year-old Aerosmith singer is doing “amazingly well” according to family sources and is said to be clean and sober.

The report says Tyler checked out of a facility earlier this week, and actually stayed longer than the 30 days he was supposed to complete in order to make sure he felt good. Tyler entered rehab in May after he relapsed while recovering from a recent foot surgery.

On May 24, 2022, Aerosmith canceled the first two months of its Las Vegas residency but confirmed that they would continue their 2022 residency dates in September, starting on the 14th and continuing into December. The band also reportedly still plans to perform at the Maine Savings Amphitheater in Bangor Maine in September. During Aerosmith’s September residency at Dolby Live, The Who will also perform two shows at the venue for the band’s The Who Hits Back 2022 Tour.

TICKETS ON SALE NOW!!! Aerosmith will continue the celebration of their 50th anniversary with a concert at the Maine Savings Amphitheater in Bangor Maine on September 4th 2022!

Aerosmith is one of the best-selling rock bands ever, selling over 150 million albums worldwide, so it makes sense why they are taking up residency at Dolby Live. Dolby Live is one of the most famous venues in Las Vegas, and it is owned by MGM Resorts International. It is located on the grounds of the company’s Park MGM casino-hotel on the Las Vegas Strip. Much like Aerosmith, MGM Resorts International has become a household name in the music business. Industry legends like Lady Gaga, George Martin, and Janet Jackson have all previously occupied residences at its indoor amphitheater, and both Aerosmith and Usher will be joining the list this summer as the latest artists to occupy a Dolby Live residency slot.

That said, MGM Resorts is better known as the owner of several land-based casinos in Las Vegas including Park MGM. The brand's newest venture is offering one of the Google Pay casinos seen popping up more and more frequently. Electronic payments are a growing market, and by offering Google Pay as an e-wallet option on its BetMGM platform, MGM Resort's players get access to quick transaction times, no-fees, and no deposit bonuses. The Google Pay feature encourages trust and safety, and, interestingly, members of Aerosmith are no strangers to embracing emerging technology business ventures, either. The band capitalized on the growth of the video game market back in 2007 when it licensed 29 songs to American video game publisher Activision to create Guitar Hero: Aerosmith. The game sold almost 600,000 copies in its first week.

A Big Summer For Rock And Metal

As exciting as September will be, with Aerosmith canceling their June and July dates in Las Vegas, some fans may be looking at the other concerts they can go to over the next two months. Fortunately, it’s going to be a big summer for rock and metal music. This is especially the case in Europe, where festivals like Into The Grave, Grasspop Metal Meeting, and Copenhell will all take place in June. Copenhell was one of Denmark’s first open-air heavy metal music festivals, and the 2022 lineup includes bands like Iron Maiden, Kiss, Dog Eat Dog, Of Mice & Men, and The Pretty Reckless. The festival will be held from June 15 to June 18, 2022. In North America, the United States will welcome back Inkcarceration Festival in Mansfield, Ohio from July 15 to 17. Inkcarceration has developed a reputation for being one of the most distinct rock festivals in the US, and the 2022 event will include performances by Three Days Grace, Sleeping With Sirens, Code Orange, and more.

We are excited to welcome @Daughtry_News to the Inkcarceration 2022 lineup 🤘

We are over 90% sold out on Inkcarceration 2022 passes, get your 🎟 NOW at https://t.co/pgZEyWF2IO pic.twitter.com/2qv2MMkqgB

Even though some fans will be disappointed by Aerosmith's decision to cancel its June and July dates for their Las Vegas residency, there is still a lot to look forward to this summer, and it's not like Aerosmith isn't planning on returning. The legendary rock band will resume its residency at Dolby Live in September, and fans will get to see two legends work together.