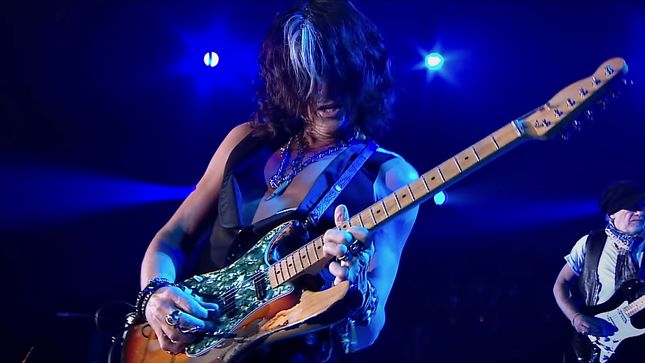 The Patriot Ledger is reporting that Aerosmith  guitarist Joe Perry has put his gated compound in Duxbury, Massachusetts on the market for $4.5 million.

Known as Brook Haven Farm, the 14-room, 7-acre country estate is at 1405 Tremont St., near the Marshfield line. Its features include a heated pool in the shape of a Gibson guitar body, rooftop garden, three-stall barn, high-tech media room, exposed beams, three fireplaces, a gym and a billiards room.

A door off the spacious kitchen leads to the Boneyard, Perry’s basement studio, where Aerosmith recorded much of the 2001 album Just Push Play and 2004’s Honkin’ On Bobo. Perry and his mates also wrote the lyrics to their hits ''Cryin'," ''Fever" and ''Livin' On The Edge" in his crib. Perry also recorded three of his solo albums in the Boneyard.

Read more and see photos at The Patriot Ledger.