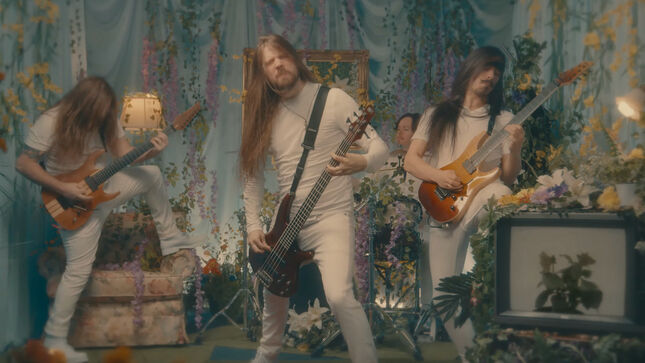 North Carolina's Aether Realm reached new levels of melodic death metal mastery with the release of their latest full-length album, Redneck Vikings From Hell, in 2020. Today, in anticipation of their upcoming US tour with Unleash The Archers and Seven Kingdoms, the band has unveiled a gripping, emotive new video for their triumphant track, "Cycle", featuring Michael Rumple (Flood District, Lorelei), off of Redneck Vikings From Hell.

Frontman/bassist Vincent "Jake" Jones says: “The lyrics for 'Cycle' came to me in a desperate place. I was trying to make sense of why I still experienced these long episodes of depression, even when there didn't seem to be an obvious reason for it to come on. It's like it was always waiting to sneak up and snatch me out of the moment, and no amount of personal growth or skill mastery or artistic recognition could prevent it from taking me in it's grip. So I thought - if I can't prevent the feeling from coming on, I can at least give myself a tangible reminder that this is normal for me. That I've made it out of low places before, and I will again. This song helps keep my feet on the ground when I'm feeling cocky highs, and it gives me some hope when I'm running low. It was a pleasure to turn that emotional blooming and wilting that we all experience from time to time into a visual aesthetic with Jaraad Nageer and Ana Manso."

As mentioned above, Aether Realm will join headliners Unleash The Archers and fellow special guests Seven Kingdoms on a US tour this fall, kicking off in Minneapolis, MN on September 1 at Cabooze. The tour will visit several major cities before coming to an end in Seattle, WA on September 26 at El Corazon.