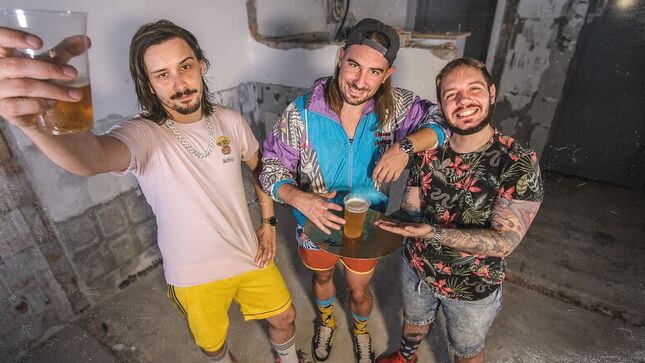 Alestorm guitarist Máté “Bobo” Bodor has completed work on his debut solo album Oh Wow! to be released on November 26 via H-Music Hungary. Máté has been an integral part of Alestorm in the last 6 years, playing on the albums No Grave But the Sea (2017) and Curse of the Crystal Coconut (2020) and also formed the band All But One with Heaven Shall Burn drummer Christian Bass and singer Joe Carter-Hawkins.

He has used the free time given by the lockdowns to write and record his first instrumental solo album, which he recorded with bass player Soma Schiszler (of the 2018 Eurovision participant band  AWS) and drummer Márk Maczák (Leander Rising, AMIGOD). The album is now available for preorder, and the first song and music video is out now, check out The Forgotten Ones below. Preorder at merch.alestorm.net.

Máté’s comments about his album:

“The idea of an instrumental solo album was born around 4-5 years ago, but the continuous touring with Alestorm and Leander Kills has made it unrealistic to make time for it, so it remained a vision only, for a long time. After we’ve completed work on the 2020 Alestorm album and I got home, the first Covid lockdowns started immediately. Because of that I was stuck at home, and for the first time after 5 years I’ve felt I have nothing to work on. In May 2020 I’ve deliberately started working on instrumental songs, initially one or two at a time, to see where this is going. I’ve completed the songs and recorded the demos all by myself, but eventually I found myself constantly coming up with new ideas and completing new ones. I thought I should do this only as long as this “natural flow” is there, and I will stop as soon as I feel it’s forced. By the end of the year I’ve completed the songwriting part of the project.

“With the finished demos I’ve contacted Soma Schiszler (AWS), who I toured together with before, so I knew he was a professional producer and is very adapted when it comes to guitar music. Together we have started discussing this album more seriously. We’ve started working with Márk Maczák, who recorded all the drums by the end of spring, so the second half of summer was about recording all the other instruments. The main concept was not to involve many people so that I could supervise the whole process and I can learn from it to improve my skills for the next albums. Eventually Soma and I recorded all guitars and bass over a few weeks. The album was also mixed and mastered by Soma.

“I really wanted to make an instrumental album that is not about ‘over-playing it for the sake of over-playing.’ The main aspect was to deliver songs with good, well-built structures, and not some kind of improvised mass that someone just played something on top of. The order of songs was not changed, they can be heard in chronological order so there is an arc to the album that can describe my feelings of that one year period. If I had to characterize this album, I’d say I’ve managed to put together songs with a certain ‘feelgood / travelling’ mood where there are only technical / complex parts where it’s really needed and has a place naturally.

“The main concept behind the album’s cover art was to include as many of my favourite things in life as possible: guitars, sea animals, basketball and donuts. Basically these are the things that make me happy, so it was clear these are the elements to make my dream world from. Polish artist Aleksandra Klepacka made this imaginary idea into reality, who had an extremely good perception of what was in my head, and delivered the basic design for the album in merely a few days.”

Máté is a Hungarian guitar player, known as the member of the internationally touring pirate metal band Alestorm, the melodic metalcore band All But One and formerly of Hungarian metal band Leander Kills.

Máté started touring at a young age with various bands internationally supporting bigger bands in the UK scene. After joining the power metal band Wisdom they were part of multiple major tours across Europe with acts such as Sabaton, Powerwolf and Eluveitie.

Joining Alestorm in 2015 brought on more performing around the globe on a much larger scale. The band has since played main stages at most of the biggest festivals in the world such as Wacken, Summer Breeze, Hellfest, Graspop, and Heavy Montreal. All accompanied by tours in Russia, Australia, South America, Asia, the United States and Canada.

Máté has been endorsed by Ibanez guitars since 2016 and mostly plays his LA Custom Shop “Bobo” model, loaded with EMGs. Since the relationship with Ibanez and EMG started, Máté has done two workshop tours around Europe to promote their products.