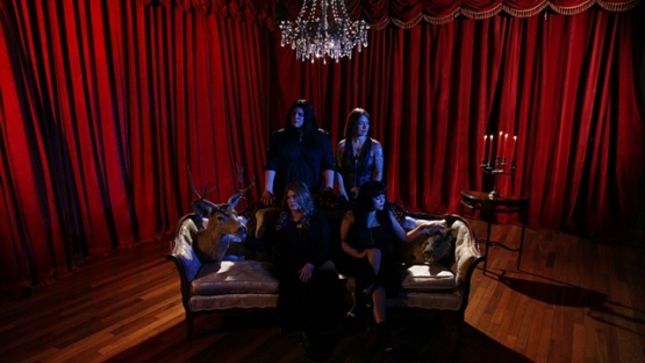 The band's seventh studio album was recorded at Ear Hammer Studios (OM, Pallbearer, Vhol) in Oakland, CA and produced, mixed and mastered by frontwoman, multi-instrumentalist and soprano vocalist Kris T. Force. The subject matter that helped inspire the album is the cleansing ritual of "sin eating". Sin Eater combines the ominous energies of Amber Asylum's drum and bass-heavy albums, Garden Of Love (2005) and Still Point (2007), with the lushest string arrangements in the band's history.

"Sin Eating still exists as a death ritual where the Sin Eater consumes a meal or 'corpse cake' that is passed over the body of the deceased or laid on the chest," Force explains. "The meal represents the sins of the deceased and once consumed by the Sin Eater the sins are released thereby allowing the soul to rest in peace. The album speaks of this process of taking on the pain of others to set them free."

Celebrating 20 years of creative music making, Amber Asylum possesses the rare gift of turning deep feelings into gorgeous music and gifts the listener with the opportunity to delve deep within and imagine or release the grip of obscure emotion. With classical strings, grounding rhythms and female voice as the nucleus of its sound, Amber Asylum occupies the singular territory of chamber doom. Overflowing with palatial textures counterpoised by electronic disturbance, achingly beautiful melodies and lyrical prowess, Amber Asylum consistently eludes predicable categorization yet remains distinctively female. During its two decade-long existence, Amber Asylum has found favour with classical music fans and metalheads alike, releasing albums on respected labels such as Relapse Records and Profound Lore and collaborating with acts such as Neurosis and Swans.

In honour of Amber Asylum turning 20, Prophecy Productions will release a limited box set entitled Anthology, simultaneously with the release of Sin Eater. Anthology will include twelve CDs, containing the band's entire catalog of work, as well as rare and unreleased bonus songs, topped off by an accompanying 80-page leather-bound lyric book.