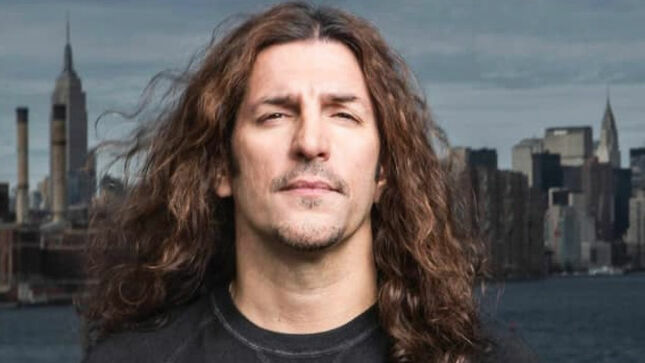 Bello is featured in a new interview with The Aquarian Weekly discussing his new book. Following is an excerpt from the chat.

On writing the book

Frank: "I didn’t realize this would be like a record. I’m always with the band releasing records or with Dave Ellefson when we released Altitudes & Attitudes, I was always with somebody else, but this is all me. I have to be honest, it’s scary as hell to put myself out there raw. Even my co-writer, Joel, said that I didn’t leave anything on the table. I let it all out. I guess I didn’t realize it until I read the book back for proofing, I was like 'Holy shit! This is raw!' I felt a little exposed, but at the same time, it was cathartic as hell, and I needed it!"

On Gene Simmons writing the foreword

Frank: "The idea of Gene came from Joel. As you read, Gene was a big influence on my life even before Anthrax. These stories showed me how to be with fans – just be normal and cool. Gene taught me a lot, so for him to write the foreword of my book… it was such an honor to have that piece of my life because Gene was so important in my life. Remember, growing up without a dad, we talked about the abandonment stuff, Gene was a hero to me when I looked at him on that stage where he was doing it right. He was doing what I wanted to do that made sense to me, that filled that void that was left from not having a dad. I looked to musicians as guides. 'That’s what I wanted to do and this will show me the path.' Gene was one of those guys on that stage that made you go, 'That’s what I want to do right there!' It gave me focus. It really did!" 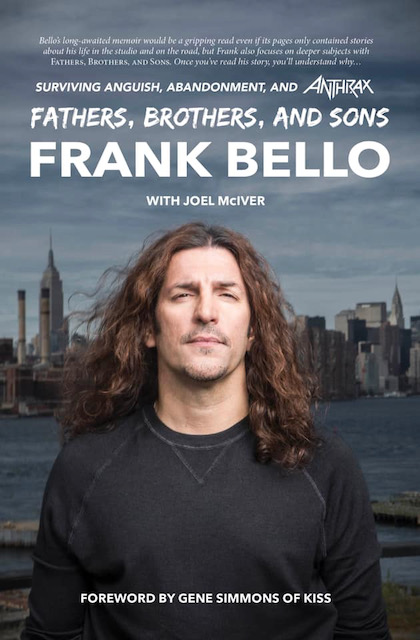 Frank Bello, bassist with the legendary New York thrash metal band Anthrax since 1984 – one of the “big four” of thrash metal - has sold over 10 million albums, travelled the globe more times than he cares to count and enthralled audiences from the world’s biggest stages. He and his bandmates have even been awarded keys to the Bronx in recognition of their status. His long-awaited memoir would be a gripping read even if its pages only contained stories about his life as a recording and touring musician. While those stories are indeed included - and will blow your mind - Bello also focuses on deeper subjects in Fathers, Brothers, and Sons. Once you’ve heard his life story, you’ll understand why.

Born into a family of five, Frank grew up in difficult circumstances. His father abandoned his wife and children, and Frank’s mother moved heaven and earth to keep them fed and educated. Left with no male role model, Frank found inspiration in heavy metal bass players, following their example and forging a career with Anthrax from his early teens—first as a roadie, and then as the group’s bass player. International stardom came Frank’s way by the mid-to-late 1980s, when he was still in his early twenties, but tragedy struck in 1996 when his brother Anthony was murdered in New York. Although the case went to trial, the suspected killer was released without charge after a witness, intimidated by violent elements, withdrew his testimony.

Two decades later, Frank is a father himself to a young son. Like many men who grew up without the guidance of a dad, he asks himself important questions about the meaning of fatherhood and how to do the job well. This is the wisdom which Fathers, Brothers, and Sons offers readers. Despite the emotive nature of these topics, Fathers, Brothers, and Sons is a funny, entertaining read. A man with a keen sense of humor and the perspective to know how surreal his story has been, Frank doesn’t preach or seek sympathy in his book. Instead, he simply passes on the wisdom gained from a lifetime of turbulence, paying tribute to his loved ones in a way that will resonate with us all.

Frank Bello is an American musician, most notable as bassist for the legendary thrash metal band Anthrax. On hiatus from Anthrax, he briefly performed with Helmet, but he has appeared on every Anthrax release since 1985. He lives in New York.

Fathers, Brothers, and Sons is scheduled for worldwide release in hardcover, e-book, and audiobook on November 2, will retail for US $28, and a percentage of sales will be donated to charities assisting abandoned families. 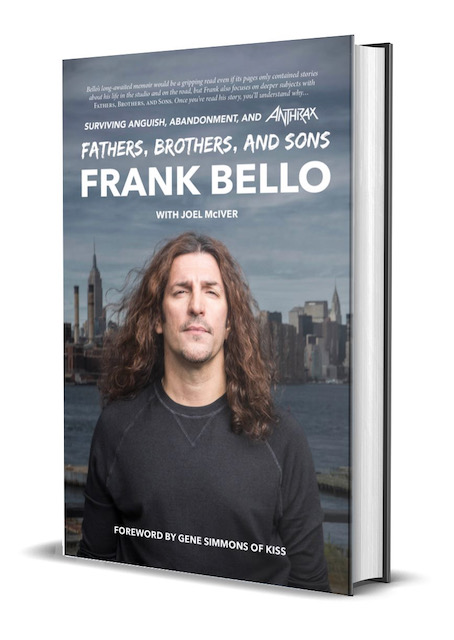