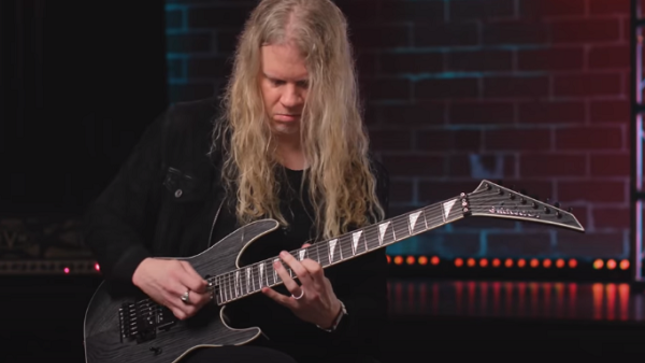 Arch Enemy guitarist Jeff Loomis has shared another video from home. Check it out below.

Loomis: "I originally uploaded this a while back, but it's gone for some reason. Here we go again! This is my one take playthrough of 'Perpetual Burn' by Jason Becker.  It was a lot of fun and pretty tricky learning this.... but worth it!"

Loomis, who was one of the founding members of Nevermore, recently shared a new instructional video on how to play the band's song "Born". The track is taken from Nevermore's 2005 album, This Godless Endeavour.

Nevermore was formed in 1991, releasing seven albums before going on indefinite hiatus in 2011. In April 2015, frontman Warrel Dane confirmed that Nevermore had not disbanded, and there was a possibility for them to continue in the next two years with another album. However, Dane passed away in December 2017, ending hopes of a reunion.

in partnership with All-Pedal, has announced the release of his signature pedal, “The Devil’s Triad”, which will be available exclusively on Reverb.

Said Loomis, “We have put so much blood, sweat, and tears into this project to absolutely dial in my tone. From developing the circuit to the artwork design, we have had a blast putting this thing together for you guys, and I really hope you all dig it. I look forward to seeing you guys shred with this thing!”

Designed by Loomis to be his all-in-one pedal, The Devil’s Triad has drive, boost, delay, and reverb functionality, and has the ability to be used as a preamp. Loomis also worked with All-Pedal to replicate his presets into Lead Guitar, Rhythm Guitar, Delay Cascade options.

Even better - everyone who purchases one of The Devil’s Triad signature pedals will be entered to win a Jeff Loomis Signature Jackson 7- string guitar, Gator hard guitar case and Gator guitar stand through All-Pedal.

Check out the full video of Loomis shredding through his walkthrough of the pedal below, and find more information here.