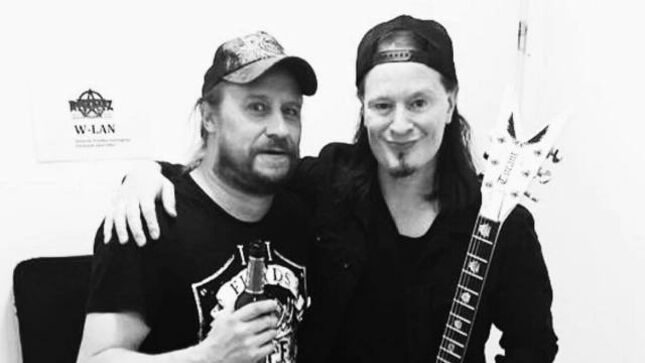 It was revealed yesterday (March 8th) that legendary Entombed/Entombed A.D. singer Lars-Göran “L-G” Petrov has passed away at the age of 49 after suffering from incurable bile duct cancer. An Entombed A.D. statement reads:

“We are devastated to announce that our beloved friend Lars-Göran Petrov has left us.

Our brother, leader, vocalist, our Chief Rebel Angel went on another ride last night. It’s with the deepest sadness that we have to announce that Lars-Göran Petrov has left us. He was (is!!!) an incredible friend, and a person that has touched so many people. He has changed so many lives with his voice, his music, his character and his unique personality. LG’s smile is something that we will carry forever in our hearts. When asked in an interview what he would like to have written on his grave and what about his legacy, he said: ‘I will never die, it will never die.’ And you didn’t. You will live forever in our hearts.

Arch Enemy guitarist / founder Michael Amott has paid tribute to Petrov with a statement issued via social media. Check it out below.

"Just heard the awful news. This really sucks... Rest in Power LG! We had a lot of great times together, especially in the late '80s underground scene when we didn’t have record deals, etc (simpler times). First time I stayed with you in your mum's apartment I couldn’t believe that you had a huge drum kit in your bedroom, and banged out King Diamond songs in the middle of the night! You were a great drummer, maybe people didn’t know that about you so much?

We had a wicked time in London, U.K. when I played in Entombed for a hot minute! We had even more fun in the early '90s when we did a few tours together with Entombed and Carcass; luckily there were no smart phones to capture all the nonsense that we got up to! I also remember the summer 2000, we shared a tour bus in Europe and opened for Iron Maiden - Fuck yeah, metal dreams do come true! Was always cool to catch up at festivals in later years, like in this pic. Also reconnecting online recently and sharing pics and memories was fun and emotional. You fought hard my friend. You did your best. Thanks for the good memories, the laughs, the music! Cheers buddy, wish you a safe onward journey. See ya on the left hand path..."

BraveWords is devasted and offers up our deepest condolences to L-G’s family, friends and fans. L-G can be heard growling on these game-changing Entombed albums: Left Hand Path (1990), Wolverine Blues (1993) and DCLXVI: To Ride Shoot Straight and Speak the Truth (1997).