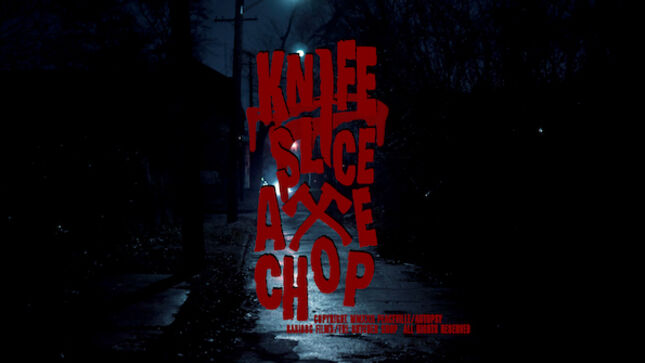 Chris Reifert laughingly says “Ever headbanged and barfed at the same time? Check out the video for our new song ‘Knife Slice, Axe Chop’ and see how it feels.  Our buddy Cam and his crew of lunatics at Rabidog Films and The Butchers Shop have given us the blood ‘n guts fest that we’ve always wanted and we can’t wait for you, our beloved Autopsy freaks to shove this nightmare into your eyes and ears. Tell yer pals!” 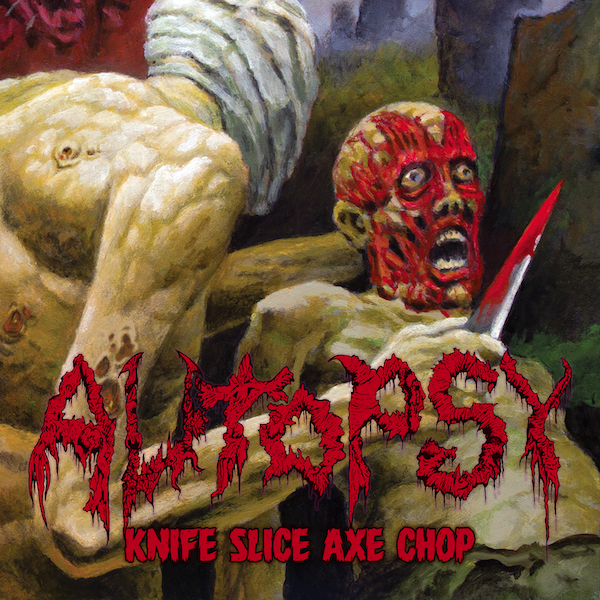 “Knife Slice Axe Chop” will be available as a digital single on all streaming platforms on Wednesday, September 21.

Since first bursting onto the death metal scene with the now genre classic Severed Survival back in 1989 and following up with the equally revered Mental Funeral album, the influential quartet has carved an unwavering legacy over three decades as masters and purveyors of the vile sides of the extreme metal spectrum. And now, Autopsy marks its reinvigorated return, presenting the first new full-length studio opus since 2014’s Tourniquets, Hacksaws and Graves with Morbidity Triumphant; a savage offering of brutal death, showing the US legends still have an unbridled hunger for the sadistic, never reluctant to step beyond the threshold of decency.

Morbidity Triumphant, the band’s eighth album, is truly a dark delight for seasoned and new listeners alike, with a raw organic sound perfectly encapsulating what makes Autopsy so distinguishable among its peers, for what could easily be considered one of its strongest offerings to date.

The driving force of Autopsy as ever is the virtuoso guitar pairing of Eric Cutler and Danny Coralles, effortlessly trading off their schizophrenic leads and switching from all-out death metal madness to groove-laden heavy doom, with unmistakable drum/vocal legend Chris Reifert being master of proceedings, spewing his own infinitely creative maniacal musings. Morbidity Triumphant also notably marks the first album to feature new bassist Greg Wilkinson, currently also seen in Static Abyss along with Chris “working with Greg on the Autopsy record was totally different than the Static Abyss one, mostly since Autopsy is a complete band with their own pre-established ways of doing things – we just abducted him into the band and had him roll with our ways, which he took to like a fish to gasoline so much so that he contributed a song musically which fit in perfectly with the rest of the sickening anthems on the album.”

Morbidity Triumphant was recorded at Opus Studios, with long-associated engineer Adam Munoz at the helm. Mastering was completed by Ken Lee.

The cover artwork appears courtesy of Wes Benscoter (Slayer, Bloodbath), with a new work of twisted and sinister genius. Chris exclaims, “Wes delivered another stunner. What a maniac!” He explains, “We didn’t give him much to work with as usual. I think, maybe, just a couple of song titles and themes maybe and his imagination did most of the work. The album title came along after the fact. After having our minds blown by Wes’ art we arrived at “Morbidity Triumphant” which seemed to fit the theme of the painting as well as the way we feel about the state of the band in general. We’ve been working hard at our sick craft with zero compromise and it seems we’re still hitting our stride somehow.”

Turn out the lights, crank it up until your speakers puke and see where it takes you. You might be surprised at the thoughts and visions that enter your head. Get the ticket, take the ride and be prepared for your mind to eat itself alive. 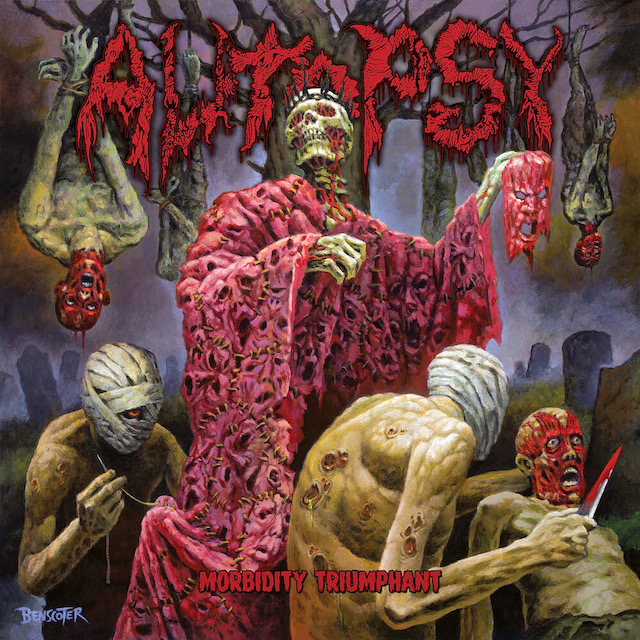 "Stab The Brain"
"Final Frost"
"The Voracious One"
"Born In Blood"
"Flesh Strewn Temple"
"Tapestry Of Scars"
"Knife Slice, Axe Chop"
"Skin By Skin"
"Maggots In The Mirror"
"Slaughterer Of Souls"
"Your Eyes Will Turn To Dust"