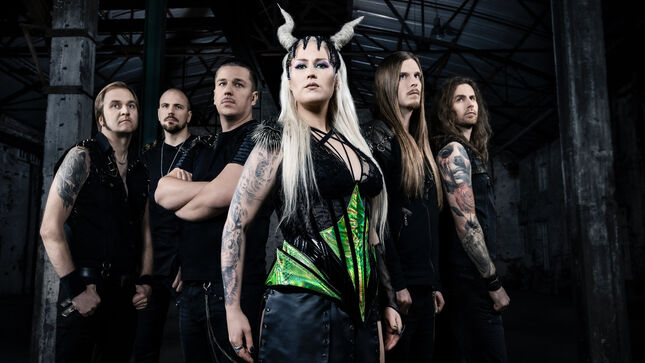 Battle Beast will make their long awaited return to North America in early 2022 in support of their upcoming record, Circus Of Doom, which will be released on January 21 via Nuclear Blast. The band will share the stage with DragonForce and will join the tour beginning March 20 in Denver, CO through April 23 in Berkeley, CA. Tickets go on sale Friday, October 29 at 10 AM, local time, here.

Commenting on the tour, vocal powerhouse Noora Louhimo states: ”Battle Beast is coming to you sounding and looking better than ever before! We are very excited to unite our forces with Dragonforce for a North America tour. I think this will be an epic combination of heavy metal energy and our fans will be getting 300% of explosive entertainment with our new album ”Circus of Doom” let loose on stage. Get ready to be mesmerized with high screams, new horns and new Battle Beast.”

After re-signing to Nuclear Blast in early 2021, Battle Beast are once again getting ready to unleash their force upon the world in the shape of their brand new masterpiece, Circus Of Doom. The album is set to be released on January 21 via Nuclear Blast, and in true Battle Beast fashion, the 10 tracks blend true heavy metal with pop and rock-vibes, paired with Noora Louhimo’s unique voice.

"Our goal was to make an interesting and absorbing album, with both lighter party songs and heavier stuff as well. In a way the whole album is like a joyful day at the circus. Full of enchanting surprises and wild carnival atmosphere", explains keyboardist Janne Björkroth.

Pre-order/ pre-save Circus Of Doom digitally here. Pre-order physical copies of the album in the format of you choice here.

Circus Of Doom was recorded at JKB Studios in Helsinki, Finland and produced and mixed by keyboardist Janne Björkroth, while the stunning artwork was created by Jan Yrlund.

Battle Beast previously announced their Circus Of Doom European Tour, that will follow the album release in spring of 2022. Starting in Paris on February 15, the tour contains 19 shows all over Europe, including three shows in the UK, before concluding in Stockholm, Sweden on March 12.

The band comment: "The long nightmare is finally behind us and the future’s looking bright! We really poured our heart and soul in this album and can’t wait to present it to you both on record and live on stage. Damn, how we’ve missed touring! You are all heartily welcome to this feast of joy and horrors - the Circus Of Doom."