BEHEMOTH Release I Loved You At Your Darkest Interview Series Part 3: NERGAL On "Wolves Of Siberia" (Video) 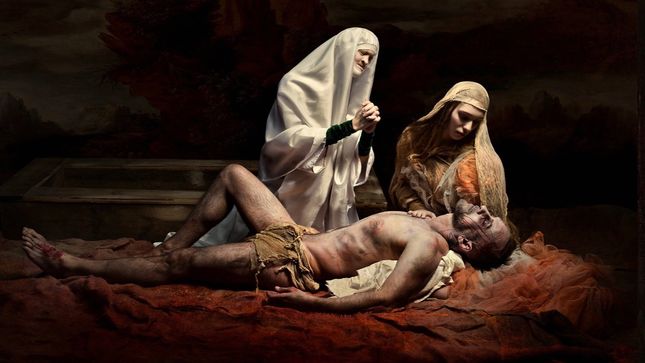 On October 5th, Polish black/death overlords Behemoth will unleash their new album I Loved You At Your Darkest upon the world via Metal Blade Records (North America) / Nuclear Blast (Europe). The band have released the third part of an interview series in support of the upcoming release. Find all three segments below.

In anticipation of this record's release, two I Loved You At Your Darkest listening parties will take place this month in New York and Los Angeles - featuring frontman Nergal in-person. Be the first to hear the album before release date and RSVP now at: behemothpartynyc@gmail.com (NYC - September 11th @ Vandal) or behemothpartyla@gmail.com (Los Angeles - September 13th @ State Social House).

Due to high demand, both the NYC and LA venues have been changed, to accommodate more fans. RSVP is still required for both events, but admittance is on a first-come, first-served basis - so arrive early! See event flyers for more details.

"It doesn't get more blasphemous than this," declares Behemoth mastermind Nergal, about the band's upcoming album, I Loved You At Your Darkest. While it certainly seems an unlikely title for a black metal band, its origin might surprise fans even more than the words themselves.

"It's a verse from the Bible," Nergal reveals. "It's actually a quote from Jesus Christ himself. For Behemoth to use it as the basis of our record, it's sacrilege to the extreme."

A crushing salvo of black metal majesty replete with hellish riffs, thundering drum cannonades and soaring liturgical choirs reminiscent of classic horror cinema, I Loved You At Your Darkest is the group's most dynamic record yet: extreme and radical on one hand, but also more rock-oriented than any other Behemoth release.

Produced by the band themselves, with drum co-production by Daniel Bergstrand (Meshuggah, In Flames), mixing by Matt Hyde (Slayer, Children Of Bodom) mastering by Tom Baker (Nine Inch Nails, Marilyn Manson), and a 17-piece Polish orchestra arranged by Jan Stoklosa, I Loved You At Your Darkest can be pre-ordered here.

The following formats are available in North America, along with an exclusive t-shirt:

I Loved You At Your Darkest tracklisting:

This October/November, Behemoth will hit the road across North America to headline the Ecclesia Diabolica America 2018 e.v. tour, featuring special guests At The Gates and Wolves In The Throne Room. This must-see show will also make its way to Europe in January/February 2019, to follow-up the band's festival appearances this month.