BERNIE TORMÉ Reconnects With OZZY OSBOURNE At Sweden Rock Festival - "It Was Like Meeting Up With A Very Old Friend, Like No Time Had Passed" 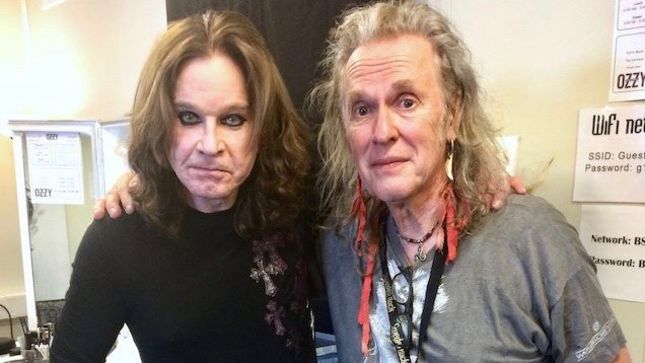 World-renowned guitar legend Bernie Tormé reconnected with Ozzy Osbourne at this year's Sweden Rock Festival, the pair hadn't seen each other since Bernie left Ozzy's band in the early 80s. Tormé famously stepped into Ozzy's band following the death of Randy Rhoads, who was tragically killed in a plane accident while touring with Ozzy in 1982.

Says Bernie: "It was such a nice thing for me to meet Ozzy at Sweden Rock Festival last weekend. Thirty six years since that absolutely awful time just after Randy passed away. I haven't seen Ozz since the year after that. This time we had a lovely chat & a laugh, it was like meeting up with a very old friend, like no time had passed.

"It meant such a lot to me, I really appreciated him taking the time to see me, he had a whole lot going on that day. What a nice guy.

"I kinda thought afterwards maybe I should've asked him to sing a track on the new album, but apart from the fact he would've told me to eff off I never even thought of it!"Bernie Tormé's new double album Shadowland is now available for pre-order, and you can be a part of the album.

Says Bernie: "I am very pleased to be back here at PledgeMusic to make a new album! This is my fourth time working with PledgeMusic, and at this stage it feels like it’s almost turning into an addiction! But a good one!

"This new PledgeMusic project will be a double album entitled Shadowland. I’ve got some great songs and ideas for it already, and a great band too, I can’t wait to get back in the studio to record them.

"There are lots and lots of special Pledge items and experiences with this project, but the one I am most looking forward to is the fact that YOU GUYS CAN PLAY ON THE ALBUM! Yes, we are looking for about 60 seconds of sonic mayhem from pledgers to make this project really rock! (Have a look at the ‘Play On The Album’ Pledge option).

"So, what else can you get if you pledge? When you pledge/pre-order the new Shadowland album, not only will you get the Shadowland double album as a download or as a physical double CD, but we are also throwing in a free additional album of rare vintage tracks called A’s & B’s 77-81. These vintage tracks have been lovingly restored from the original vinyl and are only available to pledgers on this PledgeMusic campaign. A’s & B’s 77-81 will be available as a download for all, and also as a free CD for those who pledge/pre-order the Shadowland physical CD package. You also get front seat access to the whole process, updates, videos, Q & A’s, & lots more.

"In addition, we’ve got lots of great one-off Pledge items, some very rare Gillan memorabilia (stuff that only the band & crew at the time had including original ‘Glory Road’ tour jacket and tour passes), some of it so rare that I have to thank my old Gillan compadre Colin Towns for donating it to this project because I had lost mine! There is also a Limited Edition Photobook culled from my personal collection of photos and press cuttings, and various other Pledge goodies, including a chance to jam onstage with the band on our upcoming UK tour.

"I am really looking forward to getting going on this, I hope you get on board and support me and the new Shadowland project in the same way as you did on my three earlier PledgeMusic projects, Flowers & Dirt, Blackheart, and Dublin Cowboy. You guys make the whole experience so much more enjoyable, hands on, and fun!

"As I said before, I need your support to make all this happen. By pledging and pre-ordering you guys enable me to do the thing that matters most to me, to record new music. It’s great to go out & play all the old stuff, I really love that too, but writing and recording new music is life blood to me. And PledgeMusic enables me to do that.

I really hope you get involved, and if you do, I honestly cannot thank you enough! Thank you."

Tormé will be heading out on tour for the final time in the UK later this year. The celebrated Irish six-stringer will hit the road for a string of dates in November/December.

A man whose CV is as impressive as his six-string dexterity, Tormé has lent his enviable skills over the years to Gillan, Ozzy Osbourne, Dee Snider, Atomic Rooster and many others whilst maintaining an acclaimed solo career alongside.

Returning to the stage in 2013, Bernie also began working in his favoured trio format once again, releasing three critically-acclaimed albums; Flowers & Dirt (2014), Blackheart (2015) and the 3CD Dublin Cowboy (2017) package (comprising a live, an acoustic, and a new electric studio album). All three were crowdfunded, connecting Bernie directly with his fans.

Bernie states: “In the past you were pretty distant and separated from your fans with a record label in between. Making these albums with pledge campaigns has been a great experience. I like having the connection with fans and getting the feedback direct on making an album.”

2018 will see the release of Bernie’s latest studio album.

Bernie Tormé has recorded over 24 albums in his career to date as a solo artist or band member.