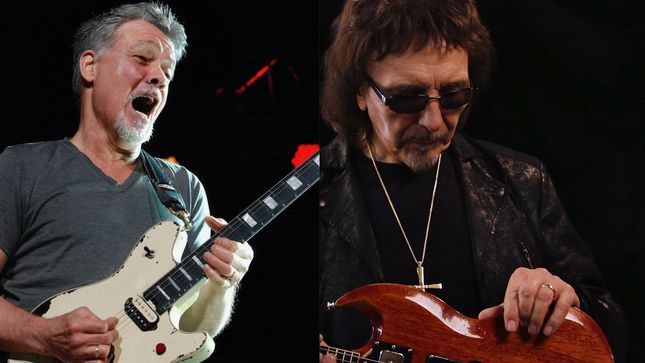 Black Sabbath guitarist Tony Iommi was in touch with Eddie Van Halen right up until the guitarist’s death earlier this week. “This week’s just been horrible,” Iommi tells Rolling Stone, as he looks back on their decades-long friendship. “I can’t stop thinking about it, to be honest. It’s very, very sad.”

The following is an excerpt from Rolling Stone's interview with Tony Iommi:

Rolling Stone: What were your first impressions of Eddie?

Tony Iommi: "I can’t remember if I heard the record first or saw them live. I must have heard the record, knowing they were on tour with us. But God, he was an amazing guitar player. I’d never heard anything like it. Like, “Bloody hell, what’s this?” Well, he was the first to do that. As a band, they were so alive and fresh. They were so good. Ed’s such a lovely guy. We really got to know each other well on that tour. He used to come around to my room most nights after the show. Or I’d go around to his room and we’d sit there talking. We used to have such a great time together. We really spilt our hearts out with each other."

Rolling Stone: What would you talk about?

Tony Iommi: "Do you really want to know? [Laughs] I’m not gonna mention that actually. [Pauses] No, we used to chat mostly about guitar, amps, sounds, and music. But we met so many times; we’d just talk about different stuff just like you do with your mates."

Rolling Stone: Ozzy Osbourne told us that Van Halen were a hard act to follow on that tour.

Tony Iommi: "They were very good. They were very energetic. You’ve got David Lee Roth there, jumping up in the air and doing somersaults, and God knows what else. And the way they’d run around the stage, of course, it was the complete opposite to us; we, like, stood there when we went on [laughs]. But they were just a very, very excellent band. You knew then that they were gonna make it. There’s no two ways about it. They just got something that nobody else was doing at that time."

Rolling Stone: Did you jam with Eddie at all on that tour?

Tony Iommi: "I think we played guitar in the room a couple of times, but most of this was after the gigs. We’d finished the show and go back to the hotel, and we’d arrange to meet in my room or his room or in the bar and have a chat. Very rarely played. I think we played a couple, three times on that tour. We all got on very well. Bill [Ward] used to chat with Alex, and I’d be with Eddie. It was always a very close thing with Van Halen."

Rolling Stone: What impressed you about Ed’s playing?

Tony Iommi: "He was just unique. When he came out with the way he played, it was a style that I’d never heard, and it blew your socks off. It was so good. And of course, he’s never gone backwards. He’s always gone forward and improved and improved. As years have gone by, his technique has developed more and more.
What I like about Eddie, he was always an inventor. He’d always want to come up with something new. He worked hard to develop his own amplifiers. And he’d work on his own guitars as best he could to make them feel comfortable to him. He was always very much an innovator with a bunch of things."