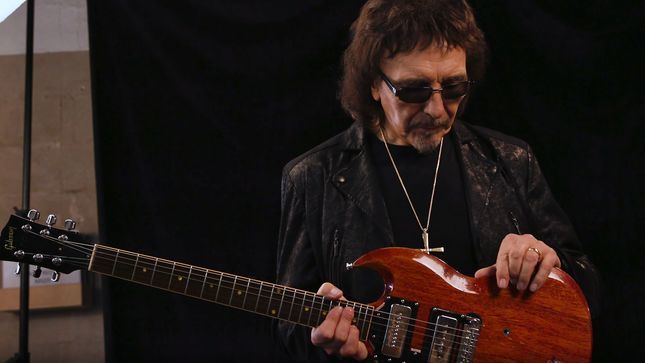 Black Sabbath legend Tony Iommi has commented on the death of his longtime lawyer, Jeff Greenberg.

The guitarist wrote: "I'd like to say how sad to hear of the passing of my long-term New York lawyer Jeff Greenberg. He'd been handling my affairs for over 30 years and had become a dear friend, way too young to be gone. My thoughts are with his wife and daughter at this time."

I’d like to say how sad to hear of the passing of my long-term New York lawyer Jeff Greenberg. He’d been handling my affairs for over 30 years and had become a dear friend, way too young to be gone. My thoughts are with his wife and daughter at this time. Tony pic.twitter.com/WBvbm9ffkD

Iommi is quoted as saying he and Pink Floyd drummer / co-founder Nick Mason have collaborated on new music.

Iommi: "A few weeks ago, Nick and I recorded a song for a charity album that will raise funds to fight cancer. They asked me to go and provide some riffs for it. Of course, I gladly agreed."

In early 2012, Iommi was diagnosed with the early stages of lymphoma, for which he underwent successful treatment. On January 3rd, 2014, in a New Year message, Iommi announced that he would be finishing his regular treatment some time that year. A few months later, Black Sabbath announced that due to Iommi's health issues, they were undertaking their final tour. As of August 11th, 2016 Iommi announced that his cancer was in remission.

In an exclusive interview with Guitar World back in May, Iommi sat down to discuss the origins of the "Monkey" 1964 SG Special Replica Guitar and the process of creating the new limited-edition reissue. He also talks current goings-on in his musical universe, from the possibility of new music, to what he discussed at his recent airport run-in with Robert Plant, to his long-standing relationship with another British rock golden god, Brian May. Read an excerpt below:

Guitar World: You mentioned earlier that when you ran into Robert (Plant) in Nashville you showed him some riffs. Does that mean we’re going to hear new music from you?

Tony Iommi: "Oh, I certainly hope so. How it started with Robert is we were talking about what we’re doing and I said, 'I’ve got so many riffs.' And I was showing him on my phone, rolling through how many I’ve got. So, yes, I want to start putting some stuff down. I was putting ideas down last year, but I haven’t done anything with them as yet. I’ve been working on and off with Mike Exeter, who has been my engineer for years now, remixing [Black Sabbath’s 1995 effort] Forbidden, the old Tony Martin/ Cozy Powell/Neil Murray record, and we’ve really taken our time with that. But I said to Mike, 'Once we’ve got this out of the way, we need to start putting these riffs down.' So it’s in the pipeline."

Guitar World: Do you have an idea of how you’d like to present this new music? A solo album? Or perhaps a band format?

Iommi: "I might do some stuff for films or for a TV series or something. I’d like to just get everything down and then decide if I’m going to have a singer or what else. But I’ve got hundreds of riffs. Brian May came over a few months ago and we sat outside and I was playing him some of them. And he said, 'You’ve got to do something with these - we’ve got to do something with these.' Because we’ve talked about putting some stuff down. So I gave him three or four CDs full of riffs and he took off with them. And you know, he’s busy with Queen stuff all the time. But when the time is right, I suppose we will do something."