BLIND GUARDIAN’s André Olbrich - “We Are Working On A Live Album!”; Audio Interview 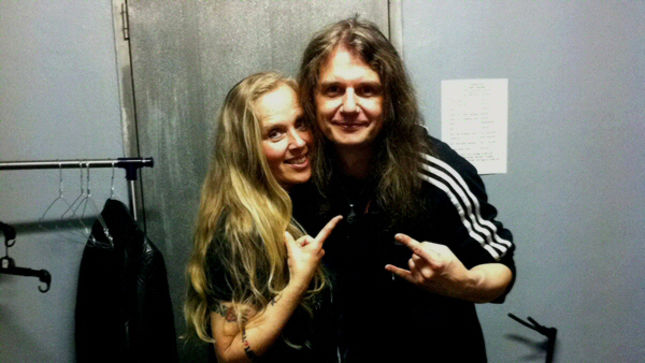 “We are working on a live album”, Blind Guardian’s André Olbrich told Metal Shock Finland’s Tarja Virmakari when the two met up at the band’s Milan, Italy show on May 5th. “We are recording the shows… we recorded all shows so far, and we want to continue this as long as possible, to collect lots of material and then, in the summer, sort it out, listen to everything, find the best songs, put an album together.”

During the chat Tarja and André also talk about the new album, Beyond The Red Mirror, the addition of the Dutch bass player Barend Courbois, the current tour and more. André also revealed  that the next orchestral studio album is already being planned for next year.

Listen to the audio interview at this location.

Blind Guardian will launch their North American tour in support of Beyond The Red Mirror on October 27th at Baltimore Soundstage in Baltimore, MD. Support on the trek will come from Grave Digger.

Blind Guardian vocalist / lyricist Hansi Kürsch comments on the upcoming tour: "Finally, the wait is over! It is almost impossible to tell you how thrilled we are about the announcement of this upcoming North American Tour. Don‘t miss your chance to meet Blind Guardian at our best shape ever. We are coming to blow your minds away. Let the games begin!!!"