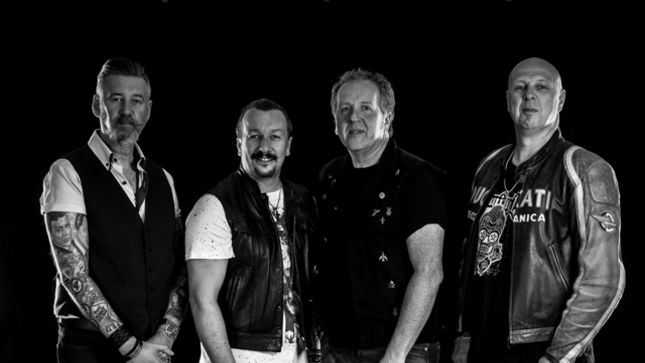 British AOR band Blood Red Saints will release their debut album, Speedway, on December 4th in Europe and North America. The album track, “Feels A Lot Like Love”, is streaming below.

Blood Red Saints is a new band formed in late 2014 by singer Pete Godfrey and bassist Rob Naylor. Pete made his recording debut on the October 2014 In Faith album, but hungry to be in a 'band' rather than a project, Pete formed Blood Red Saints with Rob from the band Angels Or Kings and quickly got to work writing their debut album.

“I went in to the In Faith knowing it was a project,” says Pete Godfrey. “We were offered shows but we couldn't find any common ground to move forward. That was the moment where I decided I wanted to be in a 'real band', one that goes out and plays live and has that 'us against the world' mentality. Without doubt, we are going to play live. We have a launch show December the 4th in Bolton, UK then we are playing the JSY/ARFM charity show in Derby at the end of January and also HRH AOR in March - working on more shows right now!”

Blood Red Saints lineup was completed by another former In Faith member, Pete Newdeck (also from Eden’s Curse and currently the vocalist for Tainted Nation) on drums and Lee Revill on guitar (ex-Gary Hughes). “Pete and I quickly became good friends,” says Pete. “It was a simple choice on my part to want him involved. Rob Naylor I knew from the 1990's, but we became friends last year, we just gelled as far as wanting the same things musically, again. Lee Revill was talked about by everyone on the local scene, his reputation was that of a phenomenal guitar player who hadn't made the jump from local bands. He is our secret weapon, unbelievably talented and not precious or egotistical at all, a genuine nice guy also!”

The search for a name ended with the chance discovery of a semi legendary Speedway team, “The Blood Red Saints”. BRS were formed in the late 1920s in Brooklyn, New York. Their leader and icon, 'Freddie Rendetti' became synonymous with the team. Freddie was a fiery colorful character who ultimately lived the fast life a little too fast.

No history of the Blood Red Saints can be complete without the inclusion of James Martin of Vega. James was instrumental in getting the band signed and – together with his twin brother Tom, he also co-wrote two songs on the album. Harry Hess from Harem Scarem took care of the mastering of the album.

The band’s debut album is an impressive slice of classic British AOR, following in the traditions of early Dare, FM and Newman, though according to Pete, “if you were to take elements of Bon Jovi, Def Leppard, Winger, FM, mix them all together, I think that is pretty much where we are. Our intention was to have great songs and next we want to take them out live and put on a great show!”

“Best Of Me” lyric video: