BLOODYWOOD On Upcoming Debut Release - "While We Did Have Interest From Multiple Labels, We Decided To Stay Independent" 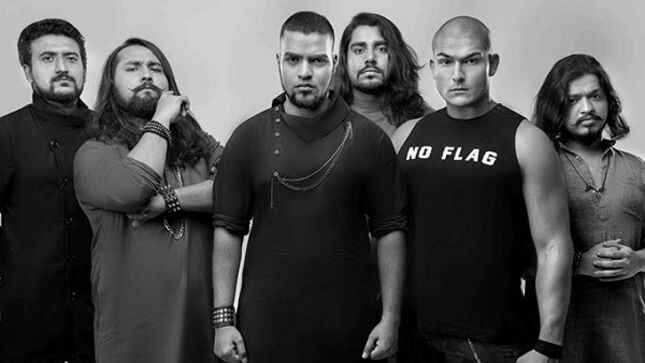 Indian folk metal rising stars, Bloodywood, will release their debut full-length, Rakshak, on February 18, 2022. They have checked in with the following message to their fans:

"This body of work embodies who we are and what we believe in. While we did have interest from multiple labels, we decided to stay independent and portray our music in its truest, most honest form. We're very lucky to have support from all of you and hope to justify all you have done for us through this album. It was written with you in mind and all the stories you have shared with us through DMs, emails and, when we were lucky enough, in person. It is our deepest desire that the songs in this album resonate with you on a personal level, help you get through your day, and strengthen you for what lies beyond."

Bloodywood recently released the first single off of the upcoming album, "Gaddaar". Check out the video below

Bloodywood is a Folk Metal band from India known for pioneering a sound that seamlessly fuses Indian Folk instruments with Metal to devastating effect. Expect to hear the percussive power of the mighty Dhol, the melancholic Flute, the single stringed Tumbi and several other uncommon yet distinctively characteristic sounds from India. A combination of thunderous Hindi/Punjabi Choruses and meaningful yet unforgiving Rap verses along with the ethnic instrumentation, makes Bloodywood a truly unique experience.

The band comments on the new single: "It's been a while since our last song, so we wanted to come back heavy with 'Gaddaar'! It's a song that's aimed at a complete separation of religion and politics across the world. Everyone deserves equal rights and equal treatment at the hands of their governments no matter who and how they worship. We've seen the use of religious and divisive politics globally in recent years and it needs to be spoken about.

It's the first single we're releasing in the build up to the album because musically speaking you'll hear something familiar, but there's also enough to hint at the evolution of our sound. That'll become evident across the release of the next couple of singles and the album itself. We gave the album everything we had and can't wait to unleash it all."

And on the album: "Rakshak means 'protector' or 'guardian' in Hindi. We've always been as passionate about the message of our music as much as the music itself, and our goal has and always will be to make a positive impact in people's lives and on the planet.

You'll hear songs that talk about combating mental illness, overcoming divisive politics, battling the poverty crisis, crushing corruption, eliminating sexual assault, hope, belief and undying determination. Musically we've taken more than a few risks and pushed the limits of our sound both vocally and instrumentally. Besides having a few songs with our signature sound, we have also experimented heavily by writing our fastest, heaviest and angriest music yet while also incorporating elements and instruments from genres that lie on the other end of the musical spectrum.

We were lucky enough to be in a position to do something positive with our time at home during the pandemic, now we're ready to explode outwards. Rakshak being our debut album, we've strived to deliver one with no fillers."

Rakshak will be released on February 18, 2022. Copies can be pre-ordered at the following locations: