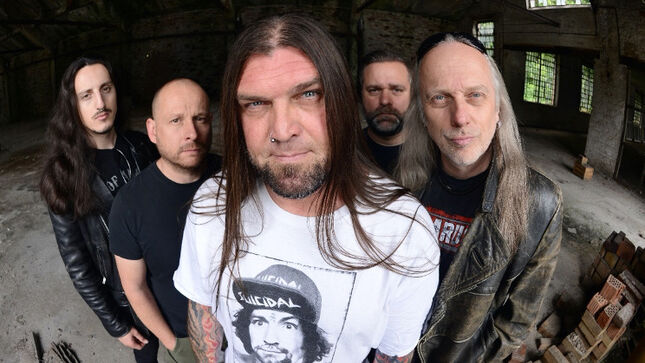 German thrash metallers, Bonded, recently released their sophomore album, Into Blackness, via Century Media Records. The album entered the official sales charts in Germany at #77 in the first week of release.

In order to continue promoting the album, Bonded have launched a new video, directed by Nico Schiesewitz / VIZO Films, for the track “Watch (While The World Burns)”.

Says the band: “Today, we are excited to launch the new Bonded video, which was once again directed by Nico Schiesewitz / VIZO Films. This might be our best clip yet and we created it for the track 'Watch (While The World Burns)', which is the powerful first full song on our second album Into Blackness. And yes, we just heard the good news that Into Blackness entered the official album sales charts in Germany on #77, so thanks to everyone who supported us and our music so far. We hope you will continue to enjoy Into Blackness and hopefully see you all on the road soon!”

The album’s limited first-pressing CD edition comes with O-Card packaging, a sticker and two bonus tracks: "Humanity On Sale" and "Will To Survive". Into Blackness is also available as 180g black vinyl on the LP format. Order here.

"Into The Blackness Of A Wartime Night" lyric video:

Bonded lineup (from left to right on photo by Sebastian “Konz” Konopka):