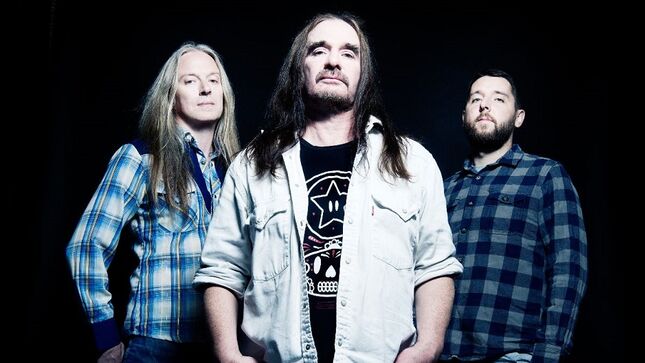 KK'S PRIEST – Sermons Of The Sinner (EX1 Records)
While some of the metal is pretty raging, the whole situation, right down to that unbearable band name, just kills it.

FEAR FACTORY – Aggression Continuum (Nuclear Blast)
Even if the band wasn't a disaster behind the scenes, does this really appeal to anyone besides teenagers in the '90s anymore? Locked in as hell, but take that talent and move on.

SEPULTURA – SepulQuarta (Nuclear Blast)
I love Sepultura, but I'm puzzled, I'm exhausted, I don't even know what this is.

ABORTED – ManiaCult (Century Media)
This band frustrates me so much. I want to love them, I used to love them, but these new records are just unlovable, forgettable DM that's too much groove and flatline production and not enough feel, no matter how gore-grind they still manage to be at heart.

CYNIC – Ascension Codes (Season Of Mist)
Talent all over the place, of course, and, man, I do enjoy some of these Cynic releases, but let's face it: this is pretty hard music to connect with some days.

When I put together my top 30 of the year list, 20 of which can be found above, I actually sat back and said, out loud, to no one, “Who the fuck are these bands?” I was amazed and very happy to see that there were so many newcomers on my list, so many bands with absurd and difficult death metal names that no human can remember (let's see that Decrepisy/Galvanizer/Gosudar/Desalmado/Dipygus tour next year). But the tunes these bands laid down this year, wow, good god, 2021 was the year of moving, raw, kick-ass death metal, both of the old-school Floridian variety and the new-school cavernous/galaxy-eating kind. I mean, have you heard the Sunless record? And Decrepisy's? Unreal. And we're not even at the top three in my list yet, sludge legends Eyehategod, death metal vets Cannibal Corpse, and the one and only Carcass dropping—no surprise—the three best records of an incredible year in extreme metal. There's so much great death metal happening out there right now it sucked up almost all my listening time this year. I mean, death metal usually does, but even moreso than usual, thanks to the amazing work from the vets and the truly astounding performances from these up and comers, many of whom will be usurping those top spots from the old dogs in no time, an exciting change of extreme-metal guard happening right before our eyes.

I've gone on about this before, but someone needs to tell the vets when their record covers suck, when the production is rookie, when the albums need to be 10 minutes shorter. Like, it's cool that David Reece sung on an Accept record once but have you laid eyes on his new album cover? This was given the green light by actual human beings? And does that new Exodus album—which is good—ever end? I put it on months ago and feel like it's still playing. Quality control: we can't be afraid to give it to the scene elders, because they are proving that they need it to maximize their still considerable ass-kicking skills.

1) More amazing death metal from the newbies. They killed it this year; let's keep momentum rolling strong in 2022.
2) A return to record labels being trusted gatekeepers of quality in extreme metal. Dark Descent has done a very good job of this the past five years, let's see some others step up.
3) I probably said this last year, but hopefully 2022 will see an actual, real return to bands touring and spreading the good word of metal everywhere from dingy clubs to big arenas, and in the process, maybe earning a dollar or two back that they lost during the pandemic.