BraveWords Preview: DANKO JONES Talks PHIL CAMPBELL's Guest Spot On New Power Trio Album - "Why Not Get The Guitar Player From The Strongest Power Trio That Ever Existed?" 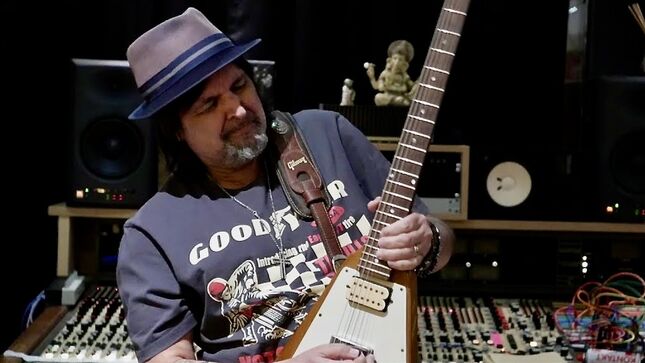 BraveWords  caught up with Toronto rocker Danko Jones to discuss the band's new album, Power trio. Following is an excerpt from the story due to be published later this week.

Danko: "I just texted him, which is the best thing, being able to do that. Phil is awesome. People should know that behind-the-scenes in Motörhead, as alpha and as tough as that band was, they are the nicest guys. It's so cool that I could just text Phil and ask him about doing the song. I get texts from Phil occasionally just making fun of me (laughs). It's kinda like being back in high school and there's this one kid who keeps putting a 'Kick Me' sticker on your back; that's Phil (laughs). It's all done in fun, and when we really needed him, he came through. 'Start The Show' was the only song I didn't have a guitar solo for, so it gave us an opportunity to bring in a guitar player. we were throwing around some names and JC (bass) suggested we get Phil because he was in Motörhead and the name of the album was going to be Power Trio, so why not get the guitar player from the strongest power trio that ever existed?"

Featuring Phil Campbell and ironically the last song on Power Trio, "Start The Show" is essentially Danko Jones' answer to Cheap Trick's "Hello There" - i.e., a song tailor-made to be the first song played at a Danko Jones show. It’s a reaffirmation of everything he was put on this earth to do. But in the wake of this pandemic-plagued year, the song also makes for a surprisingly poignant album closer, because it’s a reminder of all the shows that Danko didn’t get to play this past year, and a reminder of how much we’ve all missed that goosebump-inducing feeling of being in a packed club when the house lights go down, the music playing over the PA cuts out, and your favourite power trio emerges from the darkness to kick into their opening tune.  And yet despite this bittersweet subtext, “Start the Show” is brimming with the promise that we will experience that feeling once again—and, after the black cloud of COVID clears, Danko Jones will be there ready to give it to you.