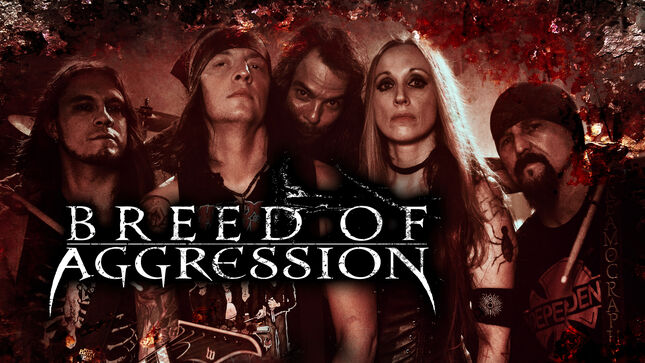 Breed Of Aggression was born out of Scott McClellan and Susie Hoffman Beahm's shared goal to create extreme metal that is organic, free, and without defining limits to their sound. Their first album, This Is My War, exemplifies that approach, delivering eight intense tracks produced by Destrophy frontman and guitarist, Ari Mihalopoulos, that boldly announce the arrival of this dynamic duo.

This Is My War will be released worldwide on Dark Star Records on November 5. Pre-order here, and listen to the first single, "Unmasked", below.

Tony Martin, former Black Sabbath lead singer on Breed Of Aggression: "Susie sings really well and the talent is surely there, the tracks that stand out for me are 'Unmasked' and 'I Am The Enemy'."

Susie Hoffman Beham discusses making the album: "This album has been two years in the making and I couldn’t ask for a better partner in its creation. The landscape Scott painted allowed me to open my mind and create something that came organically and without boundaries."

Scott McClellan talking about meeting Susie: "I had been writing a metal album & was in search of a singer for it for a while, Through mutual friends I was introduced to Susie, I asked her to audition, the 1st song I was completely blown away by her power! I was not looking for a female vocalist for this album, when I had heard her voice, my opinion was changed right away, her skill stands out like no other in both male and female metal singers, that being said Breed Of Aggression was born."

Hailing from the Midwest, Breed Of Aggression is a new heavy metal project founded by Scott McClellan and Susie Hoffman Beahm.

An accomplished guitarist and songwriter, Scott McClellan's solo album Brutal Intentions was released on Dark Star Records in 2019. He is the featured guitarist on ex-Black Sabbath frontman Tony Martin’s forthcoming solo album Thorns, set for 2022 release on Dark Star Records. In addition to Pantera tribute bands Domination and Cemeterygatez: America’s Number One Pantera Tribute Band, Scott has played in The Brain Chiggers and Brotherhood of Spine. McClellan is also an in-demand session guitarist and songwriter.

Susie Hoffman Beahm has been a staple in the music industry for over twenty years, teaming with top manufacturers on instruments that support children's discovery in the classroom and beyond. An advocate of school music programs and women's growth in the music industry, Susie frequently volunteers her time toward related causes. She has done session work on a variety of musical projects and is a member of the indie band Natural Oil and Heathen Soul.

This is My War tracklisting:

Breed Of Aggression is: