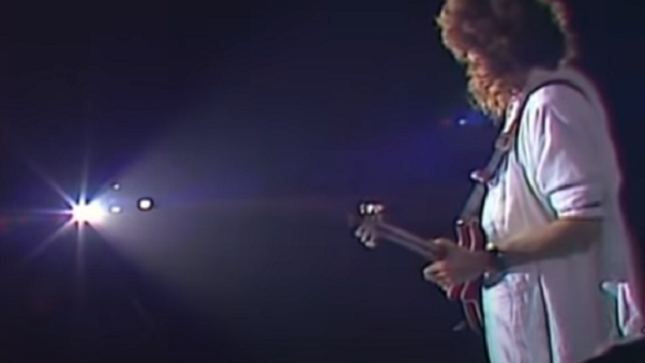 Speaking with Guitar Player, Queen guitar legend Brian May revealed the studio secrets behind his iconic "Bohemian Rhapsody" solo. Following is an excerpt from the interview.

Guitar Player: "Bohemian Rhapsody" is Queen’s best-known song, and its brief nine-bar electric guitar solo is a short and sweet musical interlude, bridging the verses to lead into what’s become known as the song’s "operatic section." Those two words alone should warn you that this song shouldn’t work. There’s no chorus and, aside from two verses, no repetition. But of course it does work, and Brian May’s solo is the perfect melodic break.

Q: What do you remember about the recording of "Bohemian Rhapsody" and how you created the solo for it?

May: "This track had been evolving for a while. It was very much the product of the fevered brow of Freddie. We knew it was something very special. It was recorded in pieces, as I think everybody knows. We would rehearse and record. We’d do it until we got it right. The various bits were put together. Freddie put a guide vocal on, and then we started doing all the multitracked vocal harmonies.

There was already a rhythm guitar on there, of course. And somewhere during that process we talked about where there would be a solo, and that part of it Freddie hadn’t mapped out. He said he wanted a solo in there, and I said I would like to, effectively, sing a verse on the guitar. I would like to take it somewhere else. I would inject a different melody. There was already a lot of color in there, but I would like to have a free hand. And I could hear something in my head at that point, long before I went in there and played it."

Q: And the idea you had in your head, was that exactly how the solo came out?

May: "Yeah. I basically sang it. I regard the guitar in that situation as a voice. I could hear this melody and I had no idea where it came from. That melody isn’t anywhere else in the song, but it’s on a familiar chord sequence, so it dovetails in quite nicely. And of course the job of the guitar solo is to bring that extra voice in, but then it’s a link into what everybody now calls “the operatic section.” You know you’re into something very different."