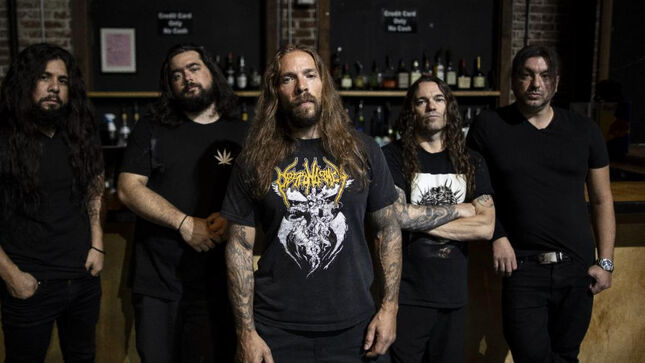 Yesterday (November 21), Broken Hope celebrated the 30th anniversary of the release of their first full-length, Swamped In Gore - which subsequently launched the band out of the underground and into the mainstream.

As a forward-thinking, fledgling act, Broken Hope's Swamped In Gore was not only ahead of its time musically, but it was also the first digitally-recorded death metal album. To learn more about this seminal record, watch guitarist Jeremy Wagner recall their debut - and other notable events throughout the years:

Wagner comments: "This past weekend, Broken Hope celebrated the 30th anniversary of the release of our first album, Swamped In Gore. I mentioned in a video for This Day In Metal that it only seems like yesterday that I was writing music and lyrics for this first album. It was exciting to be so young and have a record deal and to quickly be signed to the greatest metal label on earth: Metal Blade Records.

Swamped In Gore is part of my heart and always a part of Broken Hope's live concerts. I'm extremely proud of this album and the life that it's taken on over these last 30 years, This record - like all records in the world - is immortal. Here's to generations of death metal fans to come, discovering this debut album by a youthful Broken Hope.

I'd like to add, for those who are wondering when Broken Hope is going to have a new album out, the answer is, we hope to have something out in 2022/2023. Mike (Miczek) and I have written around five new songs for our 8th studio album. As long as I'm here and burrowing in for winter, I'm going to keep writing my ass off...the riffs and the lyrics are flowing quite nicely. Cheers!"

To commemorate this milestone, Broken Hope has released a special collection of 30th anniversary merch, which can be purchased here.