BRUCE DICKINSON Belts Out "Tyranny Of Souls" A Cappella At Los Angeles Spoken Word Show, Looks Back On Writing The Song For Aborted Project THE THREE TREMORS 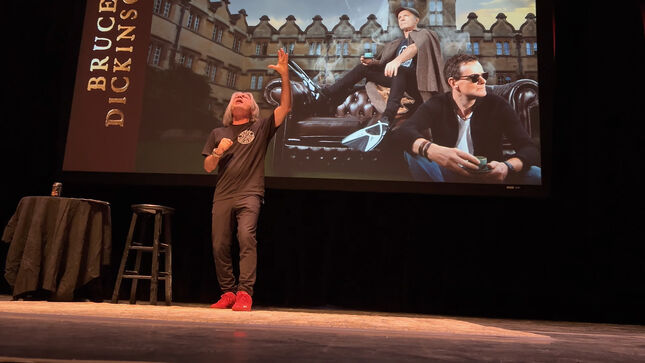 Iron Maiden frontman Bruce Dickinson brought his current spoken word tour to the Orpheum Theatre in Los Angeles, CA on March 1st. During the Q&A portion of the show, he opened up about the aborted project, The Three Tremors, which was meant to feature himself, Rob Halford (Judas Priest) and Geoff Tate (ex-Queensryche). The song "Tyrranny Of Souls" - the title track for Dickinson's 2005 solo album - was originally written for the project.

Dickinson: "We were gonna do this thing with three metal singers: myself, Ronnie James Dio and Rob Halford. However, for reasons - managerial bullshit or whatever - there was some opposition, not from me, to having Ronnie there, which I thought was crazy. So the suggestion was that we would have Geoff Tate instead. So Roy (Z / guitarist, producer) and I wrote a tune. We thought we'd have a go at writing an album that would be sung by three singers. We only got as far as one song, and that song was 'Tyranny Of Souls'. And the idea was that had we done the project, the chorus would have been all three singers, but the beginning of it would have been kind of one line me, one line Geoff, one line Rob, and so on, through the song. And each line would have been written so it would suit the delivery, it would suit the vocal characteristic of whoever was singing it. So it was quite a tall order, quite difficult to do. I thought, 'Shit, it's gonna be pretty difficult to do a whole album of this stuff.' And of course, we never did. But 'Tyranny Of Souls', the demo of it was designed to illustrate how that would have worked."

Split into two parts, the first section of his spoken word tour sees Bruce taking a humorous and often satirical look at the world from his own very personal perspective, treating the audience to private insights into his drive and ambition, peppered with plenty of Maiden anecdotes, and a myriad of other experiences encompassing not just the giddy heights but also the extreme lows, told first-hand in his inimitable anarchic style, punctuated with photographs and sometimes even erupting into song a-capella, to illustrate a point.