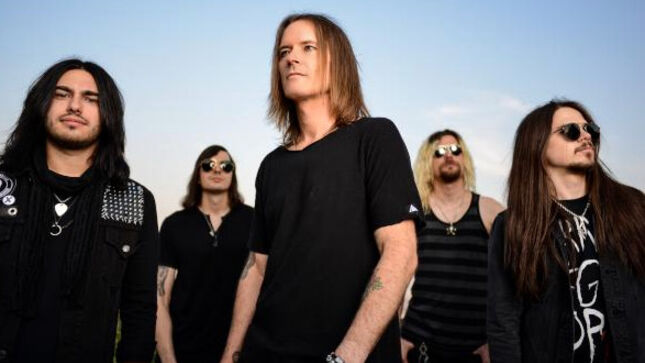 Los Angeles-based rock outfit, Budderside, beg to find the truth of life and its meaning with their new single, “The Truth”, out today across all digital streaming platforms. Stream/download it here.

Vocalist, songwriter and founding member Patrick Stone seeks out these answers in the song’s music video filmed at a valley in Santa Barbara nearby where his Mother used to live. Watch “The Truth” music video, directed by Vicente Codero, below.

Stone elaborated on the inspiration for “The Truth” stating: “My mother’s home use to sit at the top of the valley where we filmed the video in Santa Barbara. I’ve seen some of the most beautiful flowers and sunsets in my life there and had always thought it would be an amazing place to shoot. I remember sitting on her porch, it was like a theatre to watch God paint every day and night. It’s the exact opposite of where you’d expect to see this song explained. The truth is-- no pun intended--that this song is so dark it’s dangerous to focus on its lesson. Hopefully, sharing it this way will allow listeners to lean into the grove and dual guitar solo more than its honest lyrics. For once, I’m actually happy to avoid explaining and more devoted to distracting with the visuals. It had to be daunting somehow, though, and I got fixated on the rapture and how insane that would be to see. Religious beliefs are not our brand, but what lies beyond the stars and the secrets we keep played out well into this story.”

Read a Q&A below with Stone on new music, how the band’s name was formed and on how other rock bands keep borrowing the band’s musicians.

Q: Can you share how Budderside’s new album compares to past releases? What inspired or led to those artistic/style changes and why?

Stone: “It’s finally the music I’ve always wanted Budderside to be. Not that my heart and soul isn’t in everything that came before, but the whole band being as talented as they are really makes a difference in the writing, the music and the vibe. I also blame our entertainment lawyer and close friend, Eric German. He had the balls to tell us what wasn’t working and wasn’t afraid to be completely blunt. I’ve always respected Eric and the artists he works with and instead of letting his advice break me, it set me on fire.”

Q: You worked with producer Matt Good on the new album who’s worked with a lot of mainstream radio rock acts including Asking Alexandria and Hollywood Undead. Can you share how he may have added to developing Budderside’s overall sound on the album? What did he bring to the table that you felt differed from past producers?

Stone: “Eric German introduced us to Matt and Budderside quickly became his band, too. He demands greatness and constantly challenged us with styles and sounds we were uncomfortable with. It was exactly what we needed. Going in, I was completely hopeful a metamorphosis would happen, and it did. He’s hands-on about every detail and we don’t move forward until we all agree it’s perfect. We landed in a very unique and radical space with the new sound.

“His style is what makes him stand out from the rest. Matt is producing what hasn’t been done before. He’s the leader in his genre if you ask me. I love the bands he’s worked with, and you can tell the difference in the songs they’ve recorded with him and those without. He brings that special energy. Something about me changed and you can hear it in the new music. My preconceived notions about vocals dissolved from technique to truth. I was like a guitar being plugged into an amp for the first time. Everything was on 11. Putting Matt Good’s name on ours is one of our proudest achievements.”

Q: What inspired you to write “The Truth”?

Stone: “The truth. Pun intended this time. What the f*ck does this life mean? What are we doing here? What happens next? I’m suffering. Life seems to be one struggle on top of another and I don’t see the light at the end of the tunnel. I’m constantly afraid the next thing is going to push me over the edge. Have I lost sight of who I am? My bandmates believe in me and writing this song together helped me see I’m not alone. We all want to know. Give me the truth! Killing ourselves to mean something to someone, for something.”

Q: If you had the chance to be abducted by a UFO, would you take the plunge? Why or why not? If so, what truths would you expect to find from such an experience?

Stone: “Definitely. I’d expect to find exactly that, ‘the truth.’ To know the truth and to unlock the great mystery would be extremely exciting and yet bring abundant peace.”

Q: This has got to be your most asked question but you’ve shared different answers in previous interviews—for once and for all, will you tell us what the name ‘Budderside’ means and why you chose it for the band?

Stone: “There is no exact answer. What does life mean? Answer that and you’ve described its definition. How about the “F” word? Use Budderside like you use that word and you get it. If you can explain it, you ain’t got it! Narrow minded people don’t get it. Lemmy got it and that was good enough for me. The people that understand me and accept me for who I am are behind the name. To challenge that is a fight you will lose. You could say Gandhi or Einstein are strange rolling off the tongue, but not once you understand what they stood for. Once you understand us, you’ll see it and say it differently, like we do. It’s the name of a very meaningful rock band.”

Q: When people see/hear the name Budderside, what do you think they think the band sounds like? What do you want them to think?

Stone: “I would expect them to be very curious. When they hear it, I want them to be totally blown away.”

Q: Knowing that you handpicked the members of the band, how does it feel now that other large rock bands have been ‘borrowing’ them for tours, etc?

Stone: “Dorothy thanked me backstage last night for letting her ‘borrow Sam’ for her recent tour. I’m sure she knows she didn’t have to say that, but she did anyways and made me feel really good about it. I love her talent and her songs, and she deserves the very best. She knows that’s exactly what Sam is. I’m really proud to be a part of Budderside. Budderside is Sam’s band just as Budderside is Logan’s band, who’s opening for Shinedown in arenas every night with Diamante currently… and that’s where we belong. Five fingers of a hand clawing its way into the life we deserve, together.”

“The Truth” is one of the many highlights on the band’s upcoming and as-yet-untitled album. Due this fall via oneRPM, it was recorded with producer Matt Good (Asking Alexandria, Hollywood Undead). “The Truth” follows the devilish single “Never Worth It”. Previously released singles include the mental health awareness oriented “Too Far,” the self-questioning “Ghostlighting” (and its Scooby Doo-inspired music video) and the album’s debut anthemic track “Voices”.