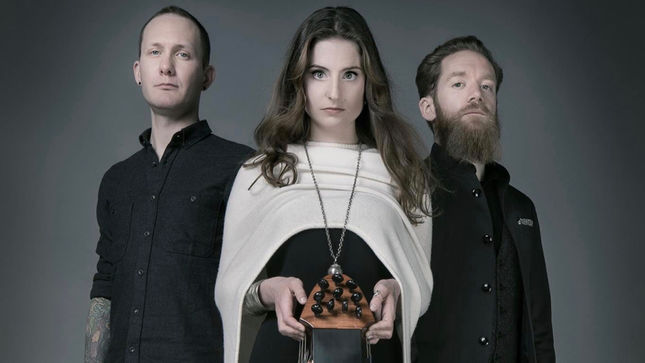 Cellar Darling, the much-hyped new band formed by ex-Eluveitie members Anna Murphy, Merlin Sutter and Ivo Henzi, will release their first studio album on June 30th. Together they will lead you away into their world of apocalyptic tales and heavy riffs, to awaken your imagination and stretch your musical tastes. This debut album with 14 brand new tracks is entitled This Is The Sound.

“In less than a year we’ve formed a new band, written an album and come up with what we believe is our sound. This is who we are and we’re looking forward to what happens with it!” - Anna Murphy

"This is it: this is the result of nearly one year of incredibly intense creativity, of ups and downs, of loss and gain. This is the most personal work of our lives. This Is The Sound.” - Merlin Sutter

The band showcased their freshly recorded songs two weeks ago for the very first time: "We’ve had the best time at our show in Lucerne earlier this month!", the band states. "For the first time, we got to play our brand new and freshly recorded songs live for you. We only wish that all of you who couldn’t make it, but who showed us such amazing support in the last year, could have been there with us. It was a magical and unique experience and we can’t wait for more.”

This was Cellar Darling’s very first performance after producing their debut album at New Sound Studio, under the watchful ear of the legendary producer and guitarist Tommy Vetterli (Coroner, Eluveitie). After an incredibly successful first show, the band will bring their new material, exclusively pre-release, to select clubs in Europe in the beginning of May.

More details about their first studio tale, released through Nuclear Blast, will follow shortly and in the meantime you can watch a trailer from the recordings in the New Sound Studio of Pfäffikon:

The band filmed an entire little studio documentary that will soon be revealed bit by bit on Cellar Darling's Facebook page and YouTube channel, so stay tuned.

After their split with Eluveitie, Anna Murphy, Ivo Henzi and Merlin Sutter quickly realized their musical journey was far from over. What quickly developed was a unique and fresh combination of grand and heavy riffs, powerful drumming and a unique voice along with the signature folky, earthy tones of the hurdy gurdy. This, combined with classical elements as well as inherited folk influences, led to the creation of something entirely new, setting Cellar Darling on the path of musical innovation.