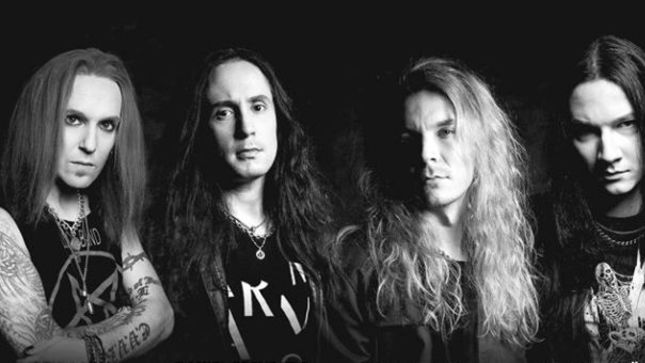 The blood in most musicians’ veins would curdle if they all of a sudden learned that the perpetually globe-trotting team they have recorded ten albums with is about to implode. This was the fate staring Alexi Laiho straight in the face at a band meeting early last year.

As the assembly was completed, the attendees had reached a unanimous decision: the group known as Children Of Bodom would cease to exist after a concert at the Helsinki Ice Hall in December 2019. The shutdown process went as planned and the members parted as friends. End of a story that had begun in 1993.

The situation was a new kind of challenge. What went through the mind of the guitarist, songwriter and bandleader who had been continually chosen as the best metal guitarist in the world by the readers’ and experts’ polls of various music magazines and websites? Laiho brushed the dust off his shoulders and revved up the engines. A new line-up or death! Luckily, he wasn’t alone.

Guitarist Daniel Freyberg crawled through the wreckage to join Laiho in his quest. Committing to a hard-working team was never a problem for him either. But two guitar players do not a group make. It was time to start thinking about who could handle the drums, bass and keyboards. There were many options to choose from. But as Laiho had already witnessed people exit less than elegantly, he wanted to get just the right cohorts.

High-level musicianship, a cool stage presence and a fitting personality were the factors put under the microscope. Finally, the pieces to complete the puzzle were found. And the name for the new line-up? It had been right under Alexi’s nose all along.

The drummer will be Waltteri Väyrynen, who has been a member of Paradise Lost since 2015, whereas bass duties are handled by Mitja Toivonen of Santa Cruz fame. As a touring keyboardist, the quartet is joined by Lauri Salomaa. Alexi Laiho will lead Bodom After Midnight to play selected festival appearances follow after which band will start working on new material.

Live dates are as follows:

"2019 is coming to an end, so it’s a good time to take a look back before turning our gaze toward a new year. For us, 2019 was eventful, and a big part of that was playing our last COB gig in December.

"We have received a lot of questions about what we’re going to do next and why we quit. Since this decision has sparked up a conversation and false rumors, we want to talk about why we ended up making it, one more time.

"There is no argument behind the band’s name trademark or its use. We have a joint agreement. Alexi Laiho sold his share of the company and this meant that the three of us became owners of the COB brand. Although plans for our future are open, what is certain is that we will never do anything to disrespect this brand and the long career we’ve built together.

"Also, we definitely want to set the record straight with the misconception that we quit because we have families or wanted to retire. Music is our profession and our lives, and all our families know that. They are proud of what we do, and they completely have our back. It should also go without saying that we as individuals are not retiring.

"Success brings with it the responsibility to take a stand on decisions unrelated to music as well. These decisions were very difficult for us. We were five band members, each with their own roles, but we couldn’t find a shared viewpoint during these last few years.

"The reason for writing this is not to point fingers but to clear things up. We are and always will be proud of what COB achieved together."

Children Of Bodom, played their final show with the current lineup on December 15th, 2019 "A Chapter Called Children Of Bodom" took place at the Black Box in Helsinki, Finland at Ice Hall.

Fan-filmed video from the December 15 show in Helsinki, Finland can be seen below: