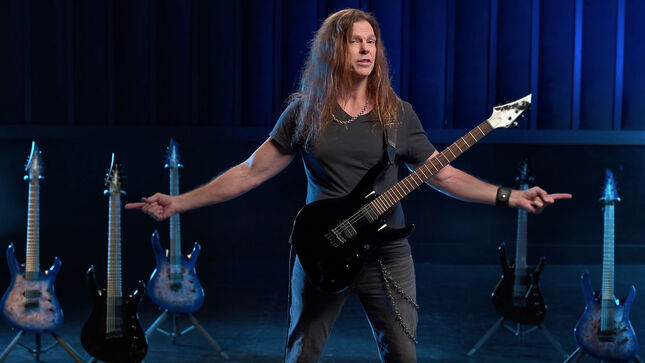 Jackson Guitars introduces the new Chris Broderick Pro Series Soloists. See the Act Of Defiance/ex-Megadeth guitarist break down all of his new signature models in the video below, and click here to see all of their specs.

Chris Broderick has been one of the most influential Jackson artists for years now, with a bevy of Soloist models bearing his name that reflect his clear vision on modern metal. Now, the Act Of Defiance and In Flames guitarist has upped the ante with a refreshed line of signature Pro Series models that update his beloved axes.

The latest Chris Broderick Pro Series Soloist editions come in 6- and 7-string formats, in addition to giving you the ability to choose between a hardtail bridge or Floyd Rose tremolo system and a menacing Gloss Black or otherworldly Transparent Blue finish. And they all fall in line with Broderick’s unique takes on the venerable Soloist.

“I’ve always said, ‘Jackson Guitars was the brand that could,’ and they helped me design this guitar with no compromise,” said Broderick. “When [first] I came to them, I was looking at other companies, and all [the other companies] wanted to do was slap a sticker on an existing guitar that didn’t play exactly how I wanted it to.

“But Jackson, the whole time, had no problem doing anything I asked. Jackson came through.”