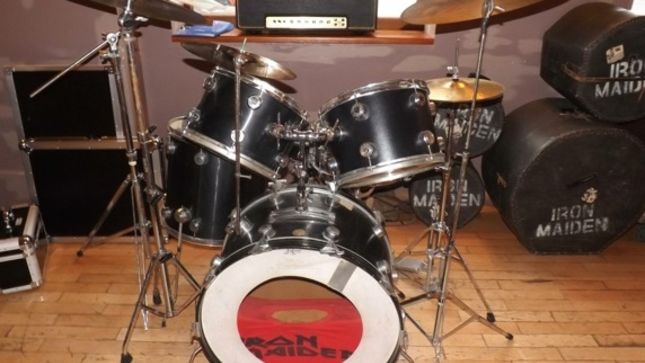 Maiden77’s Legacy Project - dedicated to the members of Iron Maiden - held a charity event last night (November 8th) in the heart of London at The Sinbin, The Plow And Harrow.

According to organizers, “the night was a huge hit and Maiden fans enjoyed mingling with former members as well as getting to listen to great live sets from Airforce, Buffalo Fish and GV1. There was also an unplanned short set by Tony Moore and Illona. For the first time ever, the first three Maiden drummers got together at the event and enjoyed chatting about their days in the band and were more than happy to have photos and sign memorabilia. Ron Rebel Matthews, Barry Purkis and Doug Sampson posed for photos by Doug’s Soundhouse Tapes kit which was on display. Guest Of Honor was Clive Burr’s partner Mimi. As a special thank you Mimi as well as Doug and Ron were presented with artwork by artist BazwoldArtist. Barry Purkis brought the original Thunderstick mask and for a donation to charity, fans got the chance to wear the mask and have photos taken. The evening finished with an auction of signed items including bass strings donated by Steve Harris and and plenty of signed photos and t-shirts. Many more items some of which extremely rare will be made available to buy from the Legacy website with money going to Clive Burr’s chosen charity MS Action.”