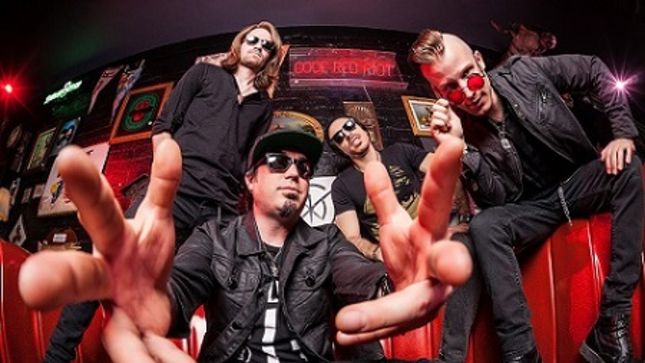 This past summer, Code Red Riot released their debut album Mask via Sony Red Music. Their newest single, “Bulletproof”, has been storming up the Mainstream Rock charts, currently sitting at #34 on the Billboard BDS Mainstream Rock Indicator chart and #25 on the Foundations SMR chart. Today, they’re premiered their ofﬁcial music video for “Bulletproof”, to accompany this latest single.

Code Red Riot was formed in 2017 by singer/songwriter Corky Gainsford, who spent most of his music career known as the drummer/co-songwriter for Otherwise (Century Media Records) and drummer/percussionist for the internationally-acclaimed performance art troupe Blue Man Group. Following in the footsteps of Dave Grohl (Foo Fighters) and Sully Erna (Godsmack), Gainsford transitioned from drummer-to-frontman by writing all the songs on Mask, and in addition to the vocals, he performed all the instruments on the album - minus lead guitar.

“Of all the songs on this album, ‘Bulletproof’ holds a special place in my heart lyrically,” Gainsford says. “It’s about reclaiming my life after enduring an incredibly unhealthy relationship, and it served speciﬁcally as a reminder to focus on what I truly love in life, without regard for the negativity, naysayers, and skeptics that had surrounded me before.”

Ironically, the theme of proving skeptics wrong continued while creating the music video for “Bulletproof”. Gainsford says, “We were fortunate that our label wanted to support a radio campaign for this song, but unfortunately we had already exhausted our album's video budget while making our two previous music videos.” Gainsford simply took this on as a challenge to produce and direct the video himself. “I didn’t have any technical background or knowledge on video production, but I’m a quick learner, I knew it would be fun, and thankfully you can learn how to do anything on YouTube these days. Armed with an iPhone and a GoPro, I was excited for the opportunity and gave it a shot.”

Gainsford enlisted actor Christopher Brown to star in the video, a seasoned performer who shared the stage with Gainsford for many years at Blue Man Group. “I wanted to create a storyline where the main character feels like an outsider, goes through a cathartic release, and emerges on the other side feeling exhilarated, or in other words: bulletproof,” Gainsford says. "Christopher was integral in helping to develop that storyline, and he was a monster when it came time to let out all his inner demons by smashing, destroying and obliterating everything we could ﬁnd in the Las Vegas desert.”