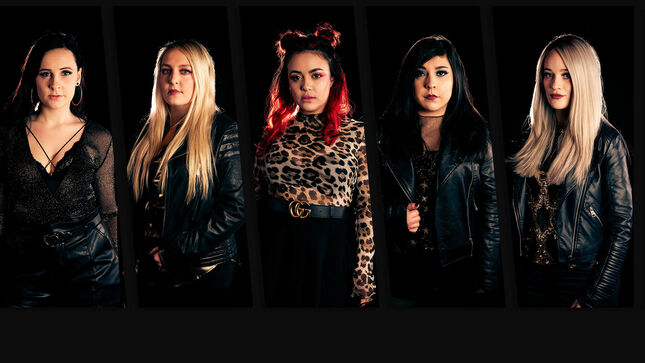 Conquer Divide and Mascot Records / Mascot Label Group have released the official music video for the band’s lead single from their upcoming new studio album. Since release, the song, “Atonement,” has over 500,000 comprehensive streams. Watch the clip below.

Guitarist Kristen Sturgis shares, “The song touches on feelings of regret, which we tried to convey in the video. You can see one of our other music videos in the reflection of the eye, for example. They're watching the time tick by wondering what their life could have been like if they would have toughed it out and put the work in. The hardest things in life are the most rewarding, and life is short. So, if you're not ready to meet us on our level, then get out of the way.”

Drummer Sam Landa adds, “The word atonement is about making reparations; about seeking forgiveness; about feeling sorry for something you’ve done and hoping to make things right. In the context of this song, it’s too late for that - the damage has already been done and there’s no going back. The song tries to capture the feelings of betrayal, of being left high and dry by people who wanted to take the easy way out. The emotions really explode in the breakdown, and the progression mirrors how situations like this can build up in real life. There’s a kind of calm before the storm, and then another sense of calm after. ‘We don’t know who you are’, and we’ve accepted that - just don’t try to come back and beg for forgiveness when you’ve exhausted all of your chances.”

The five-piece band hailing from the US, UK and Canada have made a steady progression from their melodic metalcore inspired roots, maturing into a formidable hard rock act, nearing the end of their first decade together. In 2020, featuring a re-tooled all female lineup consisting of Kiarely Castillo (vocals) Janel Duarte (vocals, Bass) Kristen Sturgis (guitar), Izzy Johnson (guitar) and Sam Landa (drums), they returned to the studio with 2x Grammy nominated producer Tyler Smyth (Falling in Reverse, I Prevail) and 4x RIAA certified gold record producer Joey Sturgis (Asking Alexandria, The Devil Wears Prada, Of Mice & Men).

They came back with a bang, moving in a more accessible direction with the release of "Chemicals". The song peaked at #23 on the Hard Rock Indicator Billboard chart, and amassed almost two million streams on Spotify. A week later, they released a hard-hitting cover of “Bad Guy” by Billie Eilish, which quickly accumulated 1.5 million streams and went into regular rotation on Sirius XM Octane.

By the spring of 2021, their next effort marked a stark departure from the sound they honed on their debut, showing their softer side with the mainstream and surprisingly poppy single “Messy.” The track exhibits a maturation of their songwriting ability, with clever wordplay and instantly memorable pop tendencies. It was added into regular rotation on Sirius XM Octane, reached #6 on the Foundations Chart, and became number one most added to the Billboard Hard Rock Indicator Chart.

Guitarist Izzy shares, “Our music over the years has become so versatile. Our next album stays true to our metalcore roots but branches out to softer songs, heavy songs and everything in the middle. We understand that people can have a variety of music tastes (like we do) from pop to metal, why not have it all in one place? There really is something for everyone.”

The band’s emerging global fan base emanates from their power as a band. It is not defined by gender, but a body of work that is connecting with males and females alike. It’s this groundswell that led to Mascot Records / Mascot Label Group aligning with Conquer Divide. An affirmation that this collective is on the verge of prominence, standing shoulder to shoulder with likeminded musicians redefining the rock space. They honor the legacy of those who came prior, while also making an emphatic statement to all they encounter that rock truly does live circa 2022.

Conquer Divide is managed by Wild Justice Management. Their hard work and efforts put forth as an independent band consistently charting amongst their signed peers sets the stage for great things to come in alliance with this new partnership with Mascot Label Group. Signed by North American President of the company Ron Burman, the girls are excited to partner with a company that allows them to express their creative vision and stay true to their roots, as well as one that has such a long-standing history with successful mainstream rock acts.

“We’ve all grown so much since our first record. We did a lot of introspection and soul-searching about which creative direction to take the band in next, and we can’t wait to share what we’ve been working on. There will be something for everyone on our sophomore album.” states guitarist Kristen Sturgis.