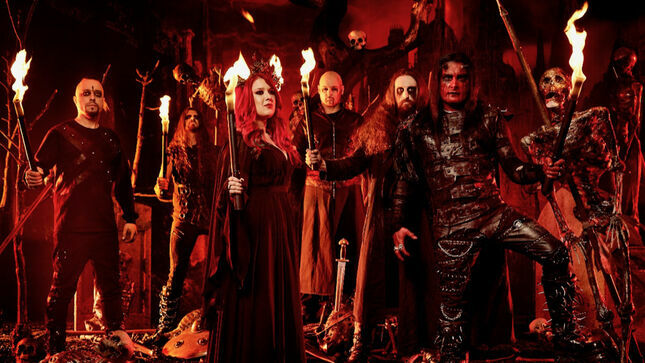 During a conversation with Ultimate Guitar's David Slavković, Cradle Of Filth guitarists Richard Shaw and Marek "Ashok" Šmerda discussed their gear, the band's latest record Existence Is Futile, and more. Following is an excerpt from the interview.

UG: The new album, Existence Is Futile, has been out since October 22. Can you single out a song that you're the proudest of from this record?

Ashok: "We are very proud of the whole record we just released. There is a lot of improvement and new elements in this one. Hard to choose just one favorite but the special track for me is 'Discourse Between Man and His Soul,' which I wrote together with our new keyboardist / female vocalist Anabelle. Ideas were floating back and forth between us and it was just magical time."

Richard: "I think we're proud of all of the songs. They're like our children. But the ones I'm most proud of are the ones that bring back great memories of writing them. 'Suffer Our Dominion' was the first song I brought to the band for this album, and to hear it with Doug Bradley's narration was a dream come true. 'Necromantic Fantasises' was written in the back of a van and backstage in a couple of venues when I was on tour with a tribute band; so when we were filming the music video, it brought back great memories of its creation."

Cradle Of Filth released their new album, Existence Is Futile, on October 22nd via Nuclear Blast. The album consists of 12 new tracks with a total playing time of 54 minutes.

"The Fate Of The World On Our Shoulders"
"Existential Terror"
"Necromantic Fantasies"
"Crawling King Chaos"
"Here Comes A Candle… (Infernal Lullaby)"
"Black Smoke Curling From The Lips Of War"
"Discourse Between A Man And His Soul"
"The Dying Of The Embers"
"Ashen Mortality"
"How Many Tears To Nurture A Rose?"
"Suffer Our Dominion"
"Us, Dark, Invincible"
"Sisters Of The Mist" (Bonus track)
"Unleash The Hellion" (Bonus track)