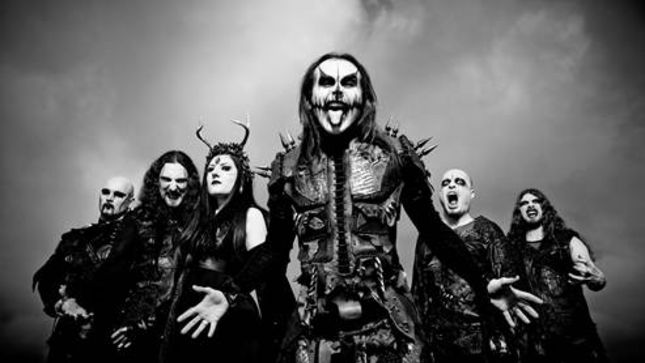 Cradle Of Filth only recently announced the completion, release and cover artwork for their opus nocturne and 11th studio album, entitled Hammer Of The Witches. Having been three years since the release of their previous album, this has been the longest gap in the band's murky history. And the wait is nearing completion.

Cradle Of Filth have revealed today that Hammer Of The Witches will be released on Jewelcase CD, Limited Edition Digipak, Mail Order Edition and 2LP vinyl formats. This highly anticipated and caliginous creation was brought to fruition in Britain’s Witch County, in darkest rural Suffolk at the reputedly haunted Grindstone Studios.

The album’s title is named after the Malleus Maleficarum, a medieval document of guidelines regarding the persecution and torture of witches – but Cradle Of Filth’s title version is more retributory. It’s the Hammer Of The Witches; the hammer is in the witches' hands. It's payback time.

Hammer Of The Witches will be released as follows:

“Walpurgis Eve”
“Yours Immortally…”
“Enshrined In Crematoria”
“Deflowering The Maidenhead, Displeasuring The Goddess”
“Blackest Magick In Practice”
“The Monstrous Sabbat (Summoning The Coven)”
“Hammer Of The Witches”
“Right Wing Of The Garden Triptych”
“The Vampyre At My Side”
“Onward Christian Soldiers”
“Blooding The Hounds Of Hell”

“King Of The Woods”
“Misericord”


Cradle Of Filth is: