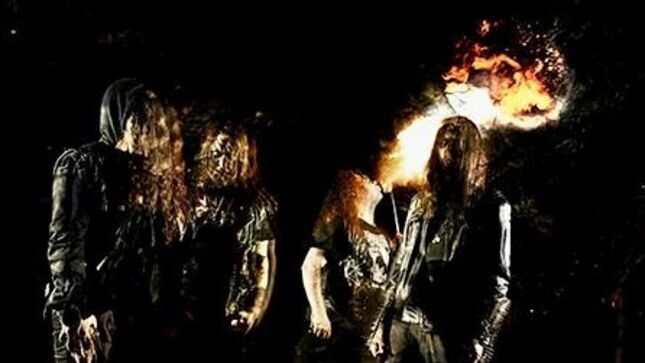 Old school stalwarts Craven Idol celebrate their 15th anniversary with Forked Tongues. Swearing by the gods of old, the North London veterans further hone their unique blend of old school extreme metal. They are streaming the new track "Iron Age Of Devastation". Check it out below.

“After spending a month on the road with Mystifier, we are a closer-knit unit than ever before. There’s a good reason for this being the longest standing line-up in our fifteen-year existence. The entire band lived and breathed this record in the months preceding the studio, and the performances delivered by each member are testament to their dedication to untarnished extreme metal of old,” says founding member Sadistik Wrath.

“'Forked Tongues' is a vicious and concerted tribute to folly of mankind. In these godless days of Sodom, craven idols are in their element, wheeling and dealing, beckoning you to follow their treacherous causes. The apocalyptic legends of ancient Greece read like unholy divination… and it is from them that we drew the subject matter for the record.”

The album takes on the anomalous tale of the serpentine beast Typhon, the fiercest of all Titans in Greek Mythology. The ‘Father of Monsters’ is said to have challenged Zeus to do battle for cosmic supremacy, ultimately succumbing to the Olympian’s might, and facing imprisonment beneath Mount Aetna. According to legend, the sporadic eruptions of the volcano are due to the enduring wrath of Typhon.

Instead of merely reciting an ancient myth, Forked Tongues acts as sequel to the original tale, with Typhon returning to settle old scores. The power of the Olympians has waned over millennia, with their ambitions tamed by excess and indulgence. Meanwhile, the misguided worship of a fictitious Golden Age has facilitated Typhon’s escape. A corpulent Zeus now faces the hundred-headed monstrosity once again.

Forked Tongues is a cautionary tale, warning of all craven idols. The monumental artwork, courtesy of master painter Eliran Kantor (Sodom, Incantation, Testament, Atheist) displays a scene of our world on the brink of total devastation.

“Peculiarly enough, the original front cover concept was inspired by Japanese artist Katsushika Hokusai, more specifically the woodblock print (Ukiyo-e) ‘The Dragon of Smoke Escaping From Mount Fuji’. Completed 1849, the work is thought to have been one of Hokusai’s last.

In Kantor’s piece, Shizuoka is replaced by Sicily, Fuji by Aetna, and the dragon by Typhon. The back cover also loosely pays homage to ‘The Great Wave off Kanagawa.'"