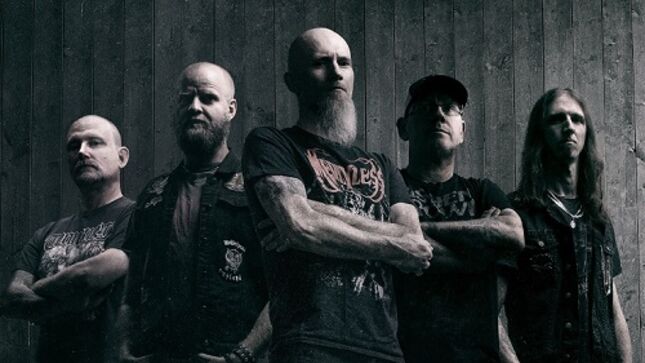 While Darkened made a none-more-auspicious start with the Into The Blackness EP during the summer of 2019, it was the band's debut album, Kingdom Of Decay, where they literally exploded onto the scene. Proud and pure death metal, no more but definitely no less, it was not at all surprising that Darkened made an immediate impact given their lineup on that debut full-length: drummer Andy Whale (Memoriam, Bolt Thrower), vocalist Gord Olson (Ye Goat-Herd Gods, Demisery), guitarists Linus Nirbrant (A Canorous Quintet, This Ending) and Hempa Brynolfsson (Excruciate, Ordo Inferus), and new bassist Tobias Cristiansson (Grave, Dismember). Patient and punishing, they proved that true songwriting stuns and crushes when practiced by masters of the death metal craft.

Now, as a precursor to a new full-length in 2022, Darkened arrive with the short & very sweet Mourn The Dying Light EP. More spacious but somehow heavier, the two songs comprising this record show that this lineup is truly finding their groove - and by "groove," we most definitely mean that of a tank! Produced, mixed, and mastered by Linus Nibrant, Mourn The Dying Light maintains a most powerful aspect - clear and crushing, as expected, but with a surprising amount of atmosphere which will likely be expanded upon on that forthcoming second album. Says the band, "This EP continues on from where Kingdom Of Decay ended, and clearly sets the tone for the upcoming album. Pushing even further into lyrical darkness, foreboding heaviness, wistful melody, and murderous aggression, Darkened are forging old-school death metal in a melancholic landscape."

In the meantime, check out the brand new track "Black Winter" below. Mourn The Dying Light artwork, courtesy of Juanjo Castellano Rosado (Unleashed, The Black Dalhia Murder, Gates Of Ishtar), and tracklisting are as follows:

"Black Winter"
"The Slime Runs Down Your Throat"