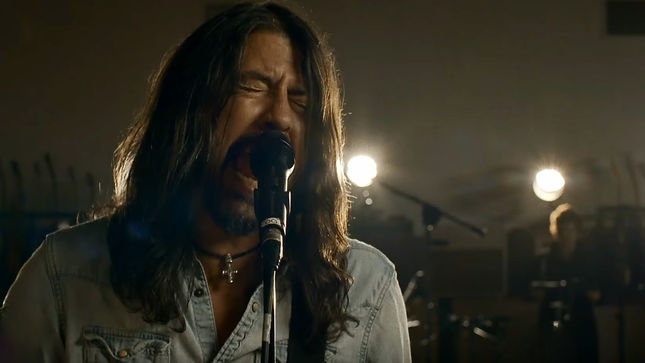 In the latest holiday-themed edition of his 'At Home With’ conversations, Zane Lowe is joined by the Foo Fighters, who run through a selection of the music featured on their playlist. The duo tells Apple Music about the experience of performing on SNL following the election, why the band has never attempted to write a Christmas song, time away from the road during quarantine, the group’s Sonic Highways and Sound City projects, Van Halen, Father John Misty, and more.

Dave Grohl on performing on Saturday Night Live after the Presidential election: "It's a trip, because we just started kind of getting back and playing together a month and a half ago, maybe two months ago. And just to be in the same room with each other, just hanging out, that felt great. Then to sit down and start playing music together, that felt great. Then playing the new stuff, which, we finished recording this record in February. It's been done. We made the record in the studio, so we hadn't played any of these new songs yet. So to sit down and play new stuff just felt like a huge relief. And then, usually with Saturday Night Live, they call you, you get the call months in advance, like weeks and weeks and weeks in advance. And they pair you with a host and the managers and the publicists talk to the network and the show and blah, blah, blah.

"This time they called us on Tuesday. And they were like, "Hey, do you want to play Saturday Night Live?" And we were like, "Of course. When?" They were like, "Saturday." So we're like, "Oh my god." It was such a rush just to pack up the gear, get on a plane, go to New York City. And then Chappelle is the host. What better show? That's the best possible show to be on. And then that morning we woke up and there was all the news with the election, so the energy was just like, there was a lot of joy, there was a lot of happiness, people were really in a good mood. And then just to stand there and play, it was actually the first time that I've ever felt really relaxed and comfortable and confident doing that show. Usually we're just a nervous wreck, but there was something about that day that just felt so f-king good.

"And then to play 'Times Like These', there was something about that moment and that vibe that the room was like pin drop silent and the words meant more than ever. Everything just felt great. And we're so lucky to have been there at the right time, at that moment, for everything just to come together like that. But it was awesome, man. It was like a nice way to introduce the world to the record. And it was just a nice way to start."

Taylor Hawkins on why Van Halen are one of his all-time favorite bands: "I remember one time driving on the road with you, Dave. We were on the road somewhere, and this was a long time ago. And I think it was still CD era. Like, I remember I used to carry a boombox around everywhere, always. Always. And I was in a Van Halen phase. And I feel like me and you were driving down the road, I don't know if you remember this, and I just said, after just maxing out hard on Van Halen, just going, "I think they're one of the best rock bands to ever walk the planet earth. They're in the top 10. There's no question. They're in the top 10," of just as far as playing, obviously Eddie Van Halen was not just a player, he was a genius. He recreated the way a guitar could be played.

"And then, all down the line from Alex who was one of the best drummers, the grooviest funkiest drummers to ever walk the planet. Michael Anthony had the best background vocals of all time. And David Lee Roth was like a freaking Pasadena keg bar, keg party, Tom Waits or something, you know? They're one of my favorite bands of all time."

Dave Grohl discusses taking mushrooms at his Mom’s Christmas party: "At my house. I don't know when this tradition started. It started maybe when I was like 13 years old or 14 years old. I grew up in a house that was really small and every Christmas night people just knew to come over to the Grohl's little house. We would all just sit around and listen to music and drink and stuff like that. By the time I was like 14 or 15, now I'm in a punk rock band, my punk rock friends are coming over. Then my mom's teacher friends are coming over and then my sister... I mean, we lived in a small little neighbourhood and everyone just knew to come over. So this one year, God I shouldn't be telling this story. This one year, I think I was like 15 or something like that. My friend gave me mushrooms for Christmas, right? I'd never taken them before. So I thought, "Okay, I probably shouldn't take them at this party because all of my mother's friends are coming over." Right? They're teachers at the school that I go to, I know these people. I'd known for a long time. So my friend gives me all these mushrooms. I think, "I'll take a little bit before the party." Did. I was out of my f-king mind. Right? So much so, one of the teachers from the school pulled me into the bathroom at one point and was like, " Are you doing cocaine?" I was like, "No, no!” So then after everyone left I stayed up and tried to learn that Zeppelin song, "Bron-Y-Aur," that acoustic thing until like six o'clock in the morning. I never figured it out. I thought I figured it out, but I didn't really figure it out."

Video, courtesy of Zane Lowe on Apple Music, can be seen below:

See Foo Fighters as they’ve never been seen before, as all six members subject themselves to Times Like Those, a 25-year visual journey through the band’s most memorable moments onstage and off.

Kick back and spend 25 years packed into half an hour with Dave Grohl, Taylor Hawkins, Nate Mendel, Chris Shiflett, Pat Smear and Rami Jaffee, and relive Times Like Those with them. You’re guaranteed to be impressed at their surprisingly intact memories of experiences on and off stage from 1995 to the present, from Seattle to Iceland, and numerous points on the globe and timeline between and beyond.