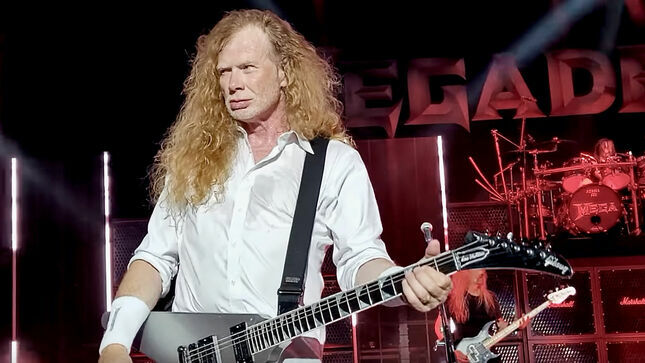 Mustaine: "We went and listened to the song and charted out the performance. Going into that kind of micromanaging of the song, we started to see a lot of things in the song where it seemed like there was no guide for the song. So we did everything the way that we do our recordings, and I believe it got a little more straightforward with the riffing and everything."

Guesting on BBC's The Rock Show With Johnnie Walker for the program|s Rock God segment, Mustaine revealed the Judas Priest song in question is "Delivering The Goods" from the Killing Machine / Hell Bent For Leather album, released in 1978.

Check out the clip here.

Mustaine: "I had no idea how much Glenn Tipton and Judas Priest had influenced my guitar playing until I recently covered 'Delivering The Goods' with my band, Megadeth, and got to go over all those guitar riffs again. It was really revealing to me how much Glenn's playing had influenced me."

"I remember when I was living with my mom and we moved in with my middle sister - I have three older sisters - and she was married to a police officer that was the Chief Of Police in a city called Stanton in California. He walked into his house and heard Priest blaring in the bedroom I was sharing with their son; that was the first time I ever stood up for metal. And when he stomped out, you know what I did? I put the record back on."

Creator Dave Mustaine, along with Producer Rafael Pensado and Director Leo Liberti, crafted together a story of the origins of Vic Rattlehead into the multi-part short film. "The Sick, The Dying… And The Dead!": Chapter III is the latest in the series that follows the saga of a war hero, now fully transformed into Vic Rattlehead, as he brutally exacts revenge and punishment on those who betrayed him and destroyed his loved ones and life. In this chapter, Vic continues to move up the chain of command as he torments his unsuspecting victim before dragging him down to eternal damnation in the land of the dead.

Watch all three videos below.

Featuring twelve new tracks, The Sick, The Dying… And The Dead! is available on CD, vinyl, and cassette, as well as digitally through all online partners and can be ordered/saved here. There is also be a limited deluxe edition 2LP, 12-track album pressed on 180g black vinyl, housed in a numbered gatefold jacket with a 12x24 lyrics/credits insert, a lenticular vinyl lithograph and a bonus 7" featuring "We’ll Be Back" and the unreleased b-side "The Conjuring" (Live).'The limited deluxe edition can only be purchased via Megadeth’s official online store, through Sound Of Vinyl, and uDiscover, and can be ordered here.

Featuring some of Dave Mustaine’s strongest songwriting while also incorporating writing from the rest of the band, The Sick, The Dying… And The Dead! brings together everything that’s exhilarating and distinctive about Megadeth. From the blistering throwback fury of "Night Stalkers" (featuring icon Ice-T) and first single "We’ll Be Back", to the more mid-tempo and melodic "Soldier On!", and the very personal title track, with its enthralling twists and turns.