DEF LEPPARD Celebrate 35th Anniversary Of Hysteria - "It's Just A Constant In Your Life, Like Shaving Or Having A Shower" 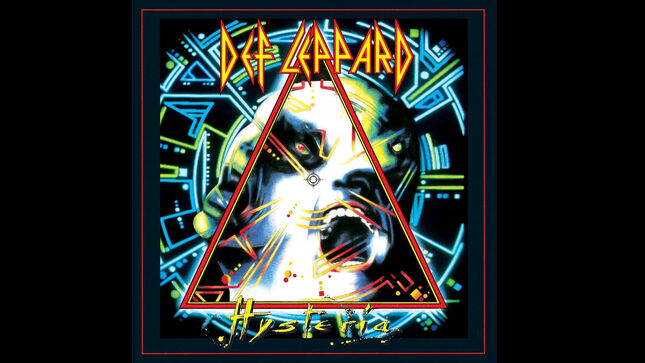 On the latest episode of Essentials Radio on Apple Music Hits, Jenn sits down with Def Leppard’s Joe Elliott and Phil Collen as the band celebrates the 35th anniversary of their chart-topping, 12x platinum-selling album Hysteria (originally released August 3, 1987). They express their gratitude for the album’s success and reflect on the initial tepid response to the album in the US before the breakout success of “Pour Some Sugar On Me”, breaking down the origins of the track and  the influence of Aerosmith and Run-D.M.C. coming together for “Walk This Way”. They also share the range of influences that informed the album and producer Mutt Lange proposing “a rock version of Thriller” as the initial briefing.

Listen to the episode today (August 3) at 11 AM, PST on Apple Music Hits or anytime on-demand at apple.co/essentialsradio. 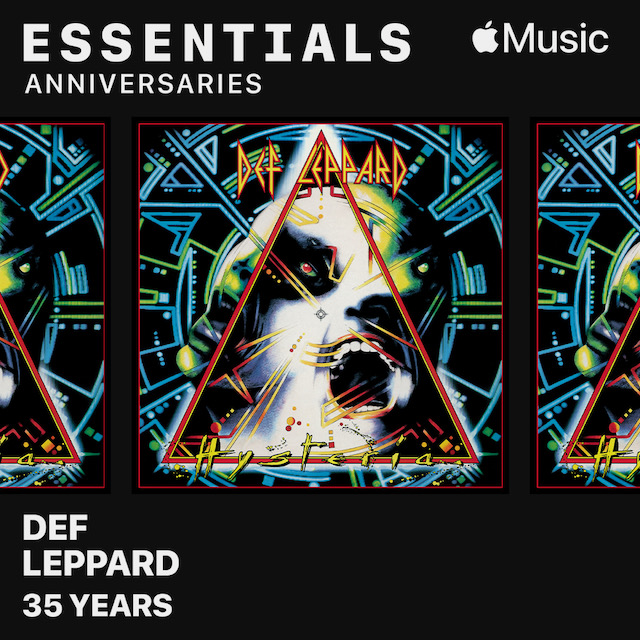 A few excerpts can be found below, courtesy of Essentials Radio on Apple Music Hits:

Def Leppard look back on Hysteria 35 years later and discuss their gratitude for the album’s success:

Phil Collen: "It's stunning. I remember hearing the mixes when Mutt first done them and thinking if my mum's the only person that gets this album, we've achieved it. Because it was everything that we set out to do and more, it was like that thing, going back to that Beatles thing of Sgt. Pepper's pushing the envelope. Being a rock band, a hard rock band, we felt we'd done that with this album and it just felt really good. So all the other stuff was gravy, especially when it come number one a year later or whatever it was. That was all gravy. But the real achievement was actually finishing it off and it sounding like it did."

Joe Elliott: "It's hard to think it's 35 years ago, because it's just a constant in your life like shaving or having a shower. It's just a constant. Which I know a lot of artists struggle with that. They go, I just don't want to talk about that. We are extremely grateful for the opportunity and the lifestyle that album has afforded us and the fact that it's gone into folklore, it's one of the big albums... And this is difficult for me to say, because it's really something that other people should say. But, it's up there with all the albums that we used to buy as kids. And so we're extremely grateful for what it's given us. We put a lot of work into that record. So from that point of view, the perspiration that went into it and the inspiration that went into it, that reward is the fact that it's being celebrated. It's lasted this long, it's going to last a bit longer as well I think."

Def Leppard reflect on the album initially tanking and getting a second life with the breakout success of “Pour Some Sugar On Me”:

Phil Collen: "Well, it tanked at first it. Hysteria come out, we'd spent so much time and money on it. It came out and was like, disappointed. In England, it was great because it went top 10. Went number …And so we're like, "Yeah, this is cool." And in America was really slow and it didn't happen. Second single, didn't happen. It was like different running orders, like "Women," "Animal," "Hysteria." "Sugar," so our albums hasn't made its money back, were in debt, and these girls in these strip clubs in Florida keep requesting this song on the local radio because they're dancing to it, because it's got this sexy groove and it's got all the things we were talking about. It's got this rock thing, it's got this rap thing, it's got these heavy drums and you can apparently dance to it in a good seductive way. Anyway, they're requesting it like crazy. It starts catching on fire. So it's on all the stations down in Florida, it starts going to number one on the stations. It gets picked up, goes to other places…so anyway, that's how it kicked off. And it started a snowball effect. It fired up and then all of a sudden everyone's going, "Oh my God, this is the best album you guys have ever done. This is so amazing”… and the album goes to number one, twice, album ends up selling 12 or 13 million in America, and you go, "Wow." But we were well aware of how it stung when we put it out... We were pleased because we felt we'd done this music that was the best thing we'd ever accomplished. So we were really happy with that. We was just a little disappointed there wasn't a reaction until that song came out, and then there was a massive reaction. Just night and day."

Def Leppard on the hybrid of influences that informed the album and wanting to make a “rock version of Thriller:

Phil Collen: "Well, Mutt had this great quote. He said, "Everyone else has just made Pyromania, part two. Let's not do that." Michael Jackson just had Thriller, which had seven hit singles. He said, "Let's do a rock version of Thriller." So that was the briefing, and we ...We'd just done a 10-million selling album, so you go, "Yeah, but everyone's copying it." They're copying the drum sound, the style, and everything. We used different things. We brought in Prince, Frankie Goes to Hollywood, The Fix, yeah, Police, all these different kind of things that we're going off. Duran Duran-Billy Idol, Steve Stevens. Yeah, absolutely, big, big influence, and these different things that other rock bands weren't doing. It was just pushing that hybrid, just expanding it a little bit more."

Def Leppard on the origins of “Pour Some Sugar on Me” and the influence of Aerosmith and Run-D.M.C’s "Walk This Way":

Phil Collen: "The last song on the album was 'Pour Some Sugar on Me'. And we'd finished the record and the label, everyone was up our ass, it's like, well, when is it going out? You know how much money ... I'm like, oh, Mutt sees Joe playing the acoustic guitar in the corridor. And he's going [mumbles/sings: "pour some sugar on me"] He goes, "what's that?" He goes, "oh, I don't know." "Just do that again." And it's "Pour Some Sugar on Me." He's singing "Pour Some Sugar on Me." So he goes, we need to record this song. He said, this is going to be the most important song on the record. This is Mutt. But even that, it wasn't just bombastic. So talking of these influences, right then, you had Run DMC, you had early rap stars emerging. And the whole thing, Mutt wanted to combine this rock thing with a rap meter. So Joe was just goofing on, they were goofing off this thing. But it actually sounded like a rap lyric. So, that was something we hadn't done before. And it's this massive guitars and massive drums. But it's got this rap style vocal done in a rock style. First time you heard it, people would go ... they were drawn to it. Do you know what I mean? And that was the genius of the Mutt thing. And it was just so great to be able to do that. Because most rock bands wouldn't do that. They'd go, "no, we're genre specific."

Joe Elliott: "We were really impressed with the fact that Aerosmith had got together with Run DMC to redo 'Walk This Way'. It was incredible. The thing about "Sugar" as well is, they said about Mutt being open to these ideas, Phil's absolutely right, I was just goofing off on an acoustic. And he went, "how does that go?" And he'd program a drum machine and put a synth base on it. And then he'd bang some guitars down and we'd sing the chorus. Then start working backwards. If you've got a chorus first, you've won. It's when you've got, I've got great verse, got a bridge. Hmm, where's the big hook. Don't bore us, take us to the chorus. We had the chorus first, so the rest was going to fall into place. And he said, what's your vocal idea for the verse?And of course it was the sound of it, it was the frenetic-ness of it. We weren't trying to be Bob Dylan. We wanted to write something that was like Get It On or Bang a Gong as it's called over here, or Metal Guru, Telegram Sam, these real wacky lyrics that just sound ... They're written to sound good, not read well. And that's what "Sugar" was. It was going to be a rappy thing. And it just built from there. I think we had the confidence by then that the 11 songs were bang on, but this 12th song sold the deal."