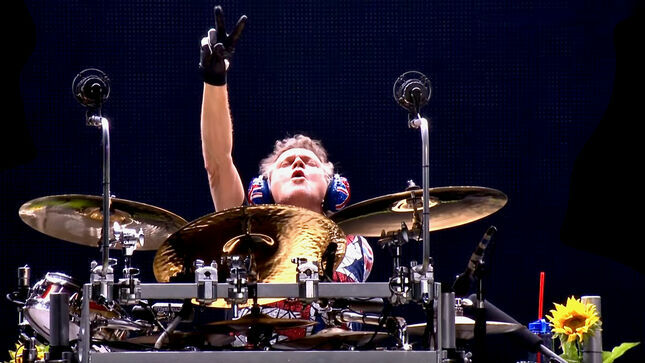 Def Leppard drummer Rick Allen is featured in a new interview wirth Jim Clash at Forbes. In the excerpt below Allen looks back on the 1984 car accident that left him with only his right arm.

Clash: Most people with four limbs can’t drum to your pro level. How do you do it with just three?

Allen: "What sparked my passion in the first place was listening to a real drum kit. No switches to turn on, no technology. It’s immediate, instant gratification. Whereas the electronic drum kit has a lot more thought behind it. I was able to put things on the kit in different places. I could put a kick drum where I could play it with my right hand. I could group drums together on my pedals that were arranged to play several different sounds at once. So there were all of these ways to have this hybrid drum kit. It made me think outside of the box, not get bogged in traditional placement of drums, but really be able to push the boundaries."

Clash: It must have been comforting to know that your fellow bandmates were willing to give you time to recover after your accident.

Allen: "I don’t think people really understood what I was going through, the level of suffering. I tended to paint a rosy picture, act as if everything was okay. If I did that, everything would be okay. As a 21-year-old, it wasn’t on my radar to be in this situation. I was still full of dreams, tons and tons of energy. Having a car accident, especially one that took my arm, was not part of what I signed up for. The most important thing the guys did was give me time to make a decision as to whether I wanted to continue to play or not. The time that they gave me to myself, and to play, and play, and play, and play, was very valuable. Finally, it was my decision. I remember saying years ago that it’s not like I could consult with a book called, 'One-Armed Drummers' (laughs). Everything I did I had to figure out for myself."