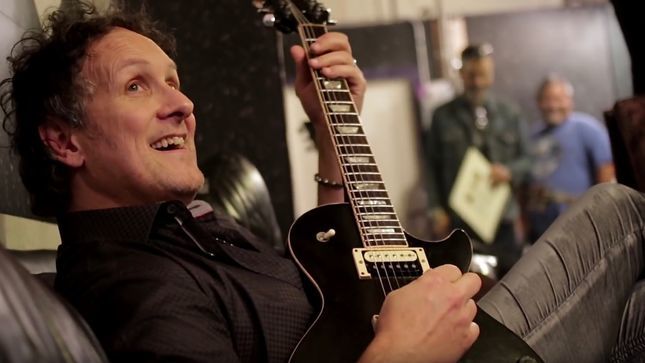 Guitarist Vivian Campbell (Def Leppard, Last In Line, Dio) was a guest on SiriusXM's Trunk Nation program on October 9. During the interview, Vivian revealed that he had surgery on his spine earlier this month.

"My back is the issue at the moment, says Campbell. "I did spine surgery last Wednesday, so I'm sitting here with an ice pack and a back brace on. So I'm a little concerned about that. It's gonna be difficult for me to do these next couple of weeks' worth of shows. I'm gonna be moving very slowly. But I know that I can get on stage and I can play guitar and I can sing, and so that's all I need to do. It'll be the travel in between that's gonna be extremely uncomfortable."

Vivian, who was diagnosed with with Hodgkin's lymphoma in 2013, added: "As far as the cancer, I'm just doing these infusions. I go back to City Of Hope tomorrow and get another infusion. And that'll keep me right for another three to four weeks. It's just maintenance. It's all good as far as I'm concerned."

Def Leppard recently shared footage from their performance at the iHeartRadio Festival 2019, which took over the stage at T-Mobile Arena in Las Vegas on September 20 and 21. Watch below: