Run Out Groove has announced the February 17, 2023 release of Deicide's Roadrunner Years 9LP Box. You can pre-order the set now on black vinyl or red vinyl.

This is the first vinyl collection of the band’s Roadrunner years albums from 1990-2001, and includes their seven Roadrunner albums plus the Amon/Deicide Feasting The Beast EP

Box includes a special customized outer box, seven single LPs and 1 double LP, an exclusive poster, an insert with tracks/credit information and a Deicide sticker sheet in an envelope. Limited and individually numbered. 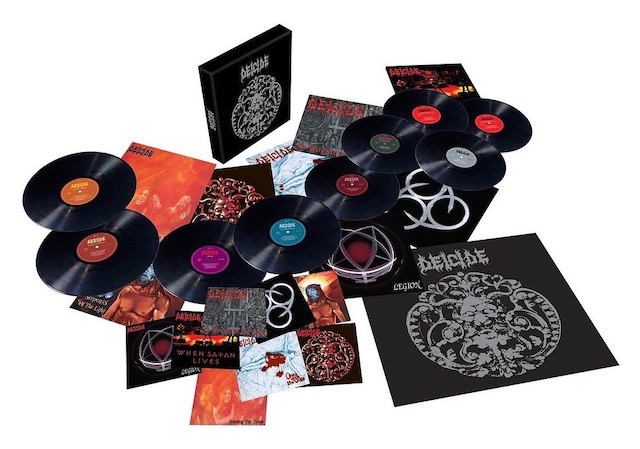 Side M (When Satan Lives….continued…)
"Oblivious To Evil"
"Once Upon The Cross"
"Believe The Lie"
"Trick Or Betrayed"
"Behind The Light Thou Shall Rise" 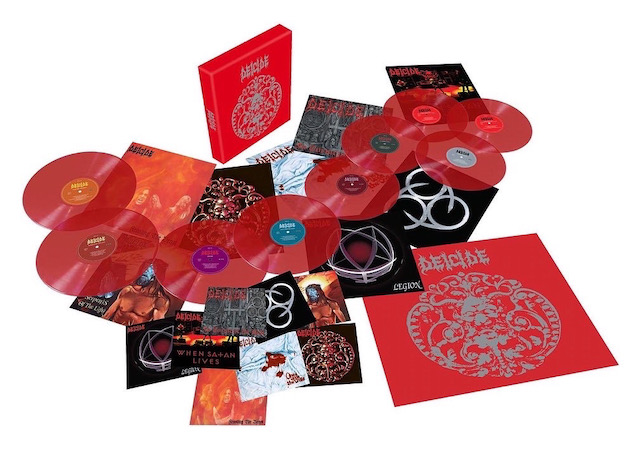 Deicide is an American death metal band formed in Tampa Florida in 1987 by drummer/composer Steve Asheim, and guitarist brothers Eric and Brian Hoffman as “Carnage.” They then hired bassist/lyricst/vocalist Glen Benton and became Amon, later changing the band name to Deicide in 1989.

Prior to becoming Deicide, the band recorded the Feasting The Beast 8-track demo in Benton’s garage and started playing some local gigs in Tampa. In 1989, they recorded their second demo, Sacrificial, at Morrisound with producer Scott Burns. Benton reportedly strormed into Roadrunner Records’ A&R man Monte Conner’s office and presented him with the demo, saying “sign us, you fucking asshole!” The next day contracts were issued and the band’s name changed to Deicide at the request of the label.

As Deicide the band released their self-titled debut album in 1990, which was also produced by Scott Burns. The debut featured re-recorded versions of all six of the Sacrificial tunes that got them signed. Both Hoffman brothers played technical solos at fast speeds with overlapping riffs, which gave the band the definitive heavy sound and complex song structures. This lineup remained intact until November of 2004, in the wake of increasing issues between Glen and the Hoffmans, allegedly regarding royalties and publishing.

The Hoffman brothers later went on to reform Amon. The band rose to mainstream success in 1992 with their second album, Legion, and is credited as the second-best-selling death metal band of the Soundscan era, after Cannibal Corpse. Since their debut in 1990, the band has released twelve studio albums, one live album, two compilations and two DVDs. In November 2003, their first two albums, Deicide, and Legion, were ranked second and third place in best-selling death metal albums of the Soundscan era.

The band is known for their controversial lyrics, which cover topic such as Satanism, anti-Christianity, and blasphemy. Their lyrics have resulted in bans, lawsuits and criticism from religious groups.