DESTRUCTION Frontman SCHMIER Says German Big Four Tour With KREATOR, SODOM And TANKARD Is "On The List Of Priorities" For 2020; Audio 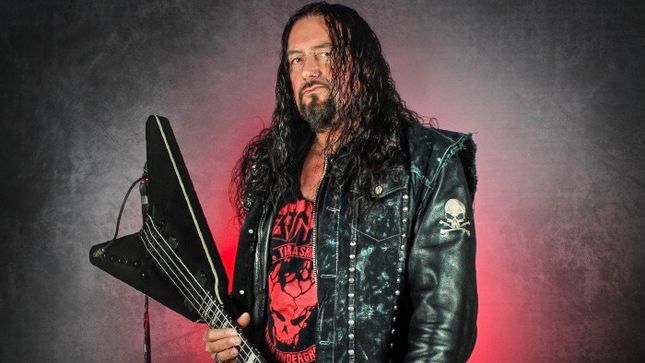 Metal Shock Finland's David Araneda recently had a chat with Destruction bassist/vocalist and songwriter, Schmier, about the lineup changes, the current state of the band, and his views of the world and the metal scene. Schmier also shared some stories from his travels to South America, the upcoming Destruction tour, and his plans to go on the road with the Big Four of German thrash metal in the near future.

In regards to touring plans, Schmier reveals: "Of course we’re gonna go back to Latin America. Actually, we will start this touring schedule right after the summer with Overkill and Flotsam And Jetsam for a second part of the Killfest, because the first Killfest was sold out everywhere, now there’s going to be a second round. Then we’re going to do festivals, we’re coming to Finland playing the Steel Chaos festival in November, which is very exciting for us to come back finally to Finland again. And then next year we’re going to start a whole touring schedule, we will have three parts of a European tour. First will be I think Southern Europe, then we do Central Europe, and then we do East Europe and Scandinavia. And in between those tours we will do Asia, United States and Canada. So, the whole first six months next year we’re gonna be on tour, supporting our new record.

"And then we will see what’s the next plan, because we’re also holding it back a little bit with the timeframe for next year and 2021, because we still want to do the German Big Four Tour with Kreator, Sodom and Tankard. So, that’s also on the list of priorities for the next year, and hopefully we’re gonna have some good news about this soon. And Latin America is maybe one of the parts of the world where this tour could start, because there’s a lot of thrash fans down there."

Read the full transcript (slightly modified to improve readability) here, and listen to the original audio, below: