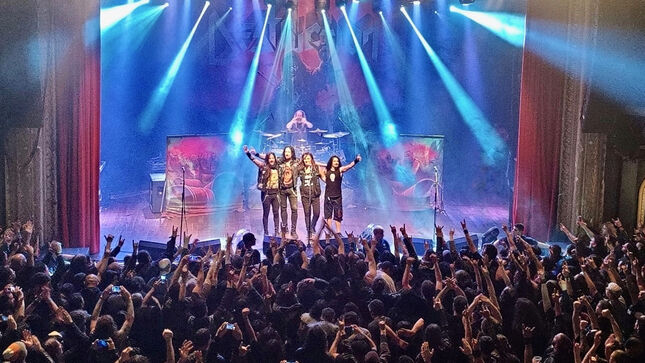 Time flies! Looking back at the last year, vicious thrash metal legends Destruction saw many successes, celebrating their 40th anniversary with the release of their impressive latest full-length record, Diabolical. Catapulting you straight into the seventh heaven of metallic bliss, their incredible fifteenth studio album brings out a heavy artillery full of honest and uncompromising thrash metal - a massacre of razor-sharp sound no fan of the genre should miss.

Able to travel the globe again, Destruction shared stages at the world’s biggest festivals like Hellfest, Graspop and México Metal Fest – which can now be seen in the new official music video for “Tormented Soul”. Capturing every single fan, Destruction brings you right back to the summer of metal ‘22.

Destruction about the new video: "The enthusiasm, energy and euphoria of the Latin American Metal crowds are legendary meanwhile all around the globe. That is the reason why we have filmed the new video clip for 'Tormented Soul' in the middle of our Latin American Attack tour, at the Mexico Metal Fest! It was always a dream to do this and of course the fans did not disappoint: they are the star of this old school music video - dive into the stamina and the lunacy of a dedicated crowd! This is METAL - this is WHY we do this!“

Destruction riffkiller Martin Furia about the Diabolical record: “Diabolical' is an album of extremes, everything is more brutal and more technical but at the same time more melodic and to the point. It's a pure and devastating Destruction album with no gimmicks, full of power and adrenaline. I'm excited for what the future is bringing and can't wait to play the new songs live!”

"No Faith In Humanity" video: