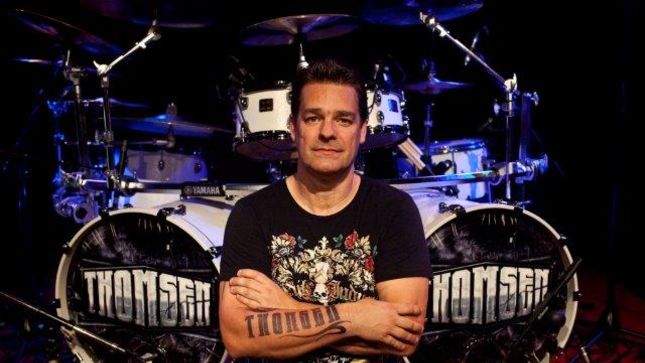 René Thomsen has composed twelve songs for Unbroken, most of them together with Fair Warning producer and guitarist Helge Engelke. “I’ve known Helge since the eighties when we shared a rehearsal room,” Thomsen remembers. “Ever since, I’ve known that he is the perfect co-songwriter and producer for my music. He’s got that unusual musical sense that Unbroken has thoroughly benefitted from.”

The roles of the guest musicians were allocated on the basis of the recordings which Thomsen and his group (Robert Soeterboek - vocals, Ingo Lühring - bass, Mike Pesin - guitar, Max Dietzmann - drums) cut: Thomsen’s long-standing friend David Vincent (Morbid Angel) played bass on ‘Draw The Curtains’. Vinny Appice was the drummer of Thomsen’s dreams for ‘We Made It’, which he wrote during the night following Ronnie James Dio’s death in remembrance of that great American rock singer. The song’s guitar solo and its intro ‘Six Thirteen 64’ were written by Mathias Dieth in direct collaboration with René Thomsen. Dieth also came up with the idea of asking his friend and erstwhile colleague Udo Dirkschneider to record the vocals. It would have been impossible to perform this number in a style more charismatic than Dirkschneider’s.

Thomsen is particularly proud of Bobby Jarzombek’s contribution to ‘Draw The Curtains’, ‘New Horizon’, ‘Unbroken’ and ‘Fools of Fortune’. “I’ve known Bobby since recording Let´s Get Ruthless, so all it took was a phone call to sign up this exceptional drummer’s services for Unbroken.” Just as uncomplicated as enlisting Rage skinsman André Hilgers, who recorded the impressive drum parts on ‘Dream’, ‘Break That Spell’, ‘Into The Unknown’ and ‘In Steel We Trust’. The fact that Hilgers is not only “a fantastic drummer, but also a really nice guy” (quote Thomsen) was of course conductive to the Unbroken project. The album was produced by René Thomsen, Helge Engelke and Arne Neurand, a team with great vision and technical skills. The team have a work-intensive and occasionally difficult production process behind them: “That’s the reason for the album title Unbroken,” Thomsen explains, “because life is about not letting adverse circumstances get you down but holding on to your dreams and carrying on.”