DOOGIE WHITE Discusses Songs On New ALCATRAZZ Album - "It Has A Couple That Are Commercially Metal, And Then It Has Some That Are Very Dark And Menacing"; Audio 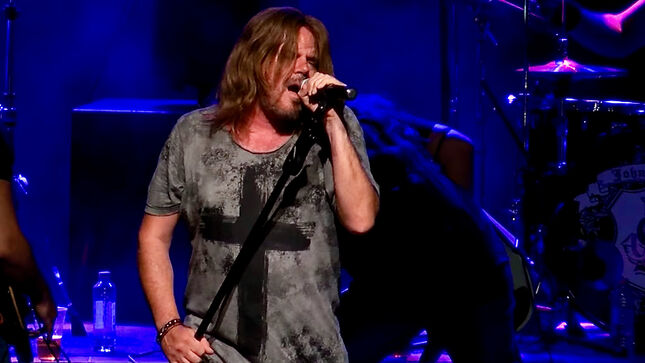 Doogie White (Rainbow / Michael Schenker's Temple Of Rock / Yngwie Malmsteen's Rising Force) spoke to Vintage Rock Pod about the re-release of his solo album As Yet Untitled, his friendship with Graham Bonnet, getting the call from Alcatrazz and a new project for Frontiers called Long Shadows Dawn with Swedish guitarist Emil Norberg.

VRP: The next thing that we can talk about right now is Alcatrazz. I mean, you've joined the boys in the band and you've taken over Graham Bonnet's lead vocals and there's new album out. We've heard the new single, which is fantastic ‘Turn Of The Wheel’ and it's got a really hard, kind of powerful feel to it, hasn't it?

Doogie White: "Yeah, it does. Well, it kind of goes in sequence. I was contacted about this (talking about re-releasing his solo album As Yet Untitled) and so I agreed to do that because all the touring stopped and that was supposed to have been starting March last year. I was going to have about nine months touring with Michael Schenker, starting in Japan and finishing up in South America.

"So they finally came up with a plan to work with a Swedish guitar player called the Emil Norberg. And we started a new project, because it won't be a band unless we get it on the road, called Long Shadows Dawn. And we started working on an album which is called Isle of Wrath. And that comes out in August.

"And just as we were finishing that The Alcatrazz guys called me and said that Graham had left Alcatrazz and would I do tour dates that they had for the previous album. But the tour dates were never going to happen because of the virus. And I said: 'Well, look, you know, rather than come in and be in a Graham Bonnet cover band or an Alcatrazz cover band, why don't we go out and write a new album and make it legitimate?'

"And so that's what we did. And we went out and we finished the album about six weeks ago, the first release came out, as you say 'Turn Of The Wheel', the second one is going to be released very soon. So it's been quite a busy time. I mean, I've written two albums since August last year, plus some little bits in between so there's no time to rest, you know, if I had any laurels, I wouldn't be sitting on them."

Doogie White: "Well, to answer the second part of your question first. I've known Graham for a very long time and we've toured together on numerous occasions and he's a dear friend. And when he was up with Alcatrazz the last time they were touring the UK and they played in Edinburgh, I got a phone call 'Would I like to go and have a coffee with Graham, walk around and have a blether and show him around the city?'

"So that's what we did. And during that time he just told me how much he wasn't enjoying it. He wasn't enjoying this kind of music. He didn't like it. He wanted to go back to the Graham Bonnet Band. He wasn't enjoying Alcatraz. He told me that hadn't even enjoyed it when he was working with Yngwie or Steve Vai and he just wanted to do music that was closer to his heart, which is what he does with the Graham Bonnet Band. And I just said to him: 'Look, man, you're a legend, you've got a great voice. You are loved the world over. You are 73 years old, just go and do something that makes you happy, rather than moaning and complaining. You know, if you have an option and, youre not happy doing this, go and do something else, you know?'

"So clearly that’s what he did. All I wanted was to see my mate happy and doing something that brought him joy. Um, and it wasn't until months later that the Alcatrazz guys called me […] that they wanted to go out and do the tour dates that they were supposed to fulfil. And if they were going to get somebody else in, well, why not me? You know, I'm sure they could and they would have been spoiled for choice, but, they asked me. I heard the music and "Turn of the Wheel" was the first song we wrote together. So I was pleased with that and it's come out really well. It's a great song. It's a commercial metal hit."

VRP: And it's getting great feedback as well. I was looking on your social media and the fans are really enjoying the fact that it's got that powerful edge.

Doogie White: "Yeah. They're enjoying it. I'm looking forward to getting out on the road with them. We're supposed to be touring later on in the year with Girls School round the UK. And then over next year into Europe. So let's see how the virus goes over the next few months to see whether that's going to be possible."

VRP: Absolutely. And in terms of the full album then, what can we expect from the full album? Is it going to have that same kind of commercial metal feel?

Doogie White: "It has a couple that are commercially metal, and then it has some that are very dark and menacing. I've been told when I'm doing interviews, the it's under embargo at the moment, so I'm not allowed to say anything. I'm not allowed to give out song titles or anything like that, but it's, it's touching on a lot of the isolation and loneliness and alcoholism and redemption and darkness, but hopefully theres a ray of hope and light at the end of it all.

"I used to always have a tune about resurrection and things like that. There was always tunes like that. And more recently I found myself gravitating towards theater, old actors and actresses who are reaching the end of their shelf life. And it could easily apply to musicians as well. When you do things that are beyond what you should be doing, that last hurrah, the magician that does his last hurrah and it goes terribly wrong, you know. No one wants anything to go wrong, you want to see people succeed and then you just go 'Oh why did you just do that?' You know, like watching an old boxer getting into the ring and you just know, man, you really shouldn't be here. So there's a couple of songs on there, like that. There's a couple of songs on there that are, and again, I'll be able to talk more about these when the album is released or when am I allowed.

"There are stories that I’ve had for a long time that I wrote a long time ago. Or the ideas anyway. Um, och I'll tell you, there was one called 'Alice's Eyes', right. It's called 'Alice's Eyes'. And when I was recording with (Ritchie) Blackmore up in, North Brookfield, in a farm up there and it was an old house and I was laying in my bed and it had one of those latched keys that it goes up like that. So you put your thumb on, it comes up like this. And so if anybody was coming in it’s the first thing you heard. And I woke up one morning and there’s a young woman walking around the bottom of my bed. And then back out again. And I thought that's the weirdest thing. That's the darnedest thing! And that was during when it was very snowy. And sometime after that Candy, Ritchie's missus, was out wandering about and she said 'Have you seen this, look?'

"And we went over and next to where the horses were there was a gravestone and it said here lies the remains of Alice Done, died age 11 or 14 or something. So I took that story and just weaved it in, and had the lyric for a while but I never had the right piece of music for it. And Joe Stomp wrote the right piece of music for it. So it's great. It's called 'Alice's Eyes' and don't tell anybody I told you that because I’ll only get spanked."

Alcatrazz recently released a promo trailer for their upcoming new album, due fall 2021, along with the following statement: "We are very excited to reveal more and more music as our release date gets closer, for now here is a taste of samples from five songs from the new record. As you can hear we are keeping this close to the original neo-classical metal sound of the first Alcatrazz album. Doogie (White, vocalist) has been a major contributor to the song writing and we feel this is maybe our best and most cohesive record yet, a band that is finally all on the same page and doing this for the right reasons... this is not simply a means to an end situation but a band of people who genuinely love this music. Furthermore we are excited to get out there live with the freedom of knowing that come showtime we are relying on nothing but the talents of the five members of the band."

Alcatrazz released its new single, “Turn Of The Wheel”, via Silver Lining Music. The song is available now on all digital platforms here. The video for the song can be viewed below. 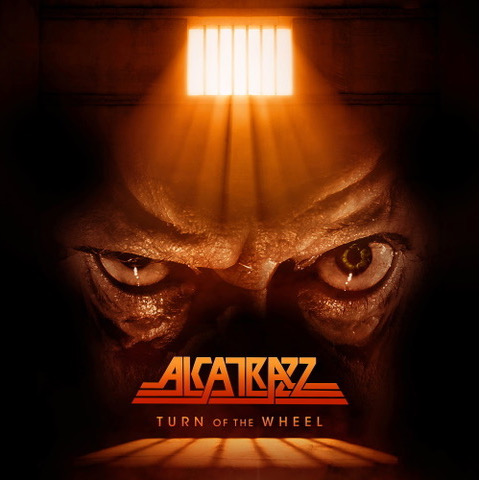 The new album featuring original members Jimmy Waldo and Gary Shea, along with new vocalist Doogie White, drummer Mark Benquechea, and guitarist Joe Stump will be released in the fall of 2021. Pre-order will begin on July 23.

"'Turn Of The Wheel’ was the first song we wrote together,” states vocalist Doogie White. “When I heard the riff and the groove, I thought HERE WE GO! From that moment, it was all hands on deck to do the best album we could. ‘Turn Of The Wheel,’ as a complete RAWK tune works brilliantly.”

Doogie continues, “We spend so much time wondering about how the mistakes we made yesterday could be made better tomorrow that we forget about today. Today is what we have. Yesterday is gone, and we may not have tomorrow."

Formed in 1983, Alcatrazz became famous for its blend of melodic and progressive rock and for introducing guitar hero’s Yngwie J. Malmsteen and Steve Vai. Emerging in 1983 with No Parole From Rock 'n’ Roll, which featured the hit “Island In The Sun,” the band continued building popularity in 1985 with their sophomore effort, Disturbing The Peace, which contained the hit, “God Blessed Video”.The band issued one more studio LP, 1986’s Dangerous Games, before ceasing operations the following year. The band regrouped and released Born Innocent in 2020, their first studio album containing all-new material since 1986.

Alcatrazz released the following statement in regards to 2021: "We are extremely happy that our good friend Doogie White will be our singer for the 2021 Alcatrazz tour dates. We are all fans of Doogie's voice and impressive catalog of music. We promise an explosive live show of the Alcatrazz classics that you know, plus some added selections from Doogie's work with Rainbow and Michael Schenker. We might even have a couple of new songs for you as well! We look forward to seeing all our fans and friends in what we hope is a much-needed return to live music next year! See you all soon...Be safe!" - Jimmy Waldo, Joe Stump, Gary Shea & Mark Benquechea