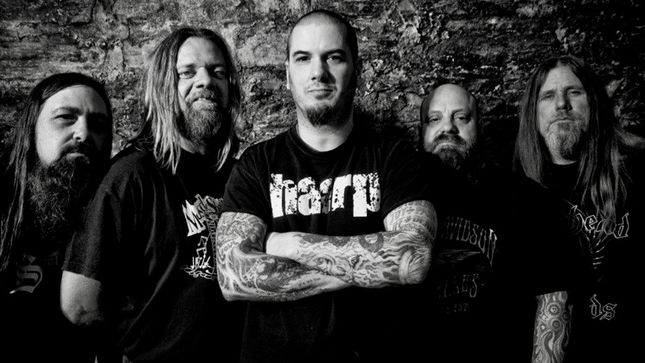 Down are celebrating the 25th anniversary of their debut album, Nola, with three European festival appearances in June 2020: Copenhell in Copenhagen, Denmark, Graspop in Dessel, Belgium, and Hellfest in Clisson, France.

Guitarist Kirk Windstein left Down in 2013 to concentrate on Crowbar full-time; he was replaced by Bobby Landgraf. Online speculation has been rampant as to who would play guitar alongside Pepper Keenan next year. Speaking exclusively to BraveWords scribe Aaron Small, Kirk Windstein sets the record straight, saying:

“I’ve been on the phone with Pepper Keenan probably 20 times in the last four days; we’re trying to figure this thing out. I talked to (vocalist) Philip Anselmo for the first time in years; had a nice 45-minute conversation, just catching up. I’m definitely a part of it. Put it this way, Pepper’s quote to me was, ‘If Kirk ain’t doing it, I ain’t doing it.’ He told that to Phil and Jimmy (Bower, drummer). I said to Pepper, we’ve been though a lot together, but I would love to do it, and if you ain’t doing it, I ain’t doing it. It’s the Nola record! It’s got to be… Jesus, none of us are getting any younger. I would love to do more stuff, like Psycho Las Vegas. We’ve been going back and forth with scheduling; that’s the problem. You’ve got me back full-time in Crowbar, you’ve got COC with Pepper, Phil with The Illegals… it is difficult, but I’m hopeful we can squeeze these few shows in and make it happen.”

As it stands currently, in December 2019, Kirk Windstein will be on stage next year at Copenhell, Graspop, and Hellfest with Down. “Yeah, if it ain’t me, it’ll be nobody. My understanding, beyond any shadow of a doubt, from Phil and Pepper, is they are not doing it without me. And I appreciate that! Our friendship goes back to when we were teenagers; we’re in our 50s now. That makes me feel good. Anything Down does from here forward, whether it’s a full tour or one show, I’m 99.9% sure that I’m a part of it. I’ve been asked, and I really appreciate it, being back in the band. It’s back to what it started out as, which is a side project. In all honesty – hindsight’s 20/20 – but, it’s better as a side project. Everybody’s got a strong personality, everybody’s got their own bands going on, their own songwriting going on. The thing is, we want to do this. Anything that Down happens to do, whether it’s one show or 100 shows, as far as I know, I’m back in the band.”