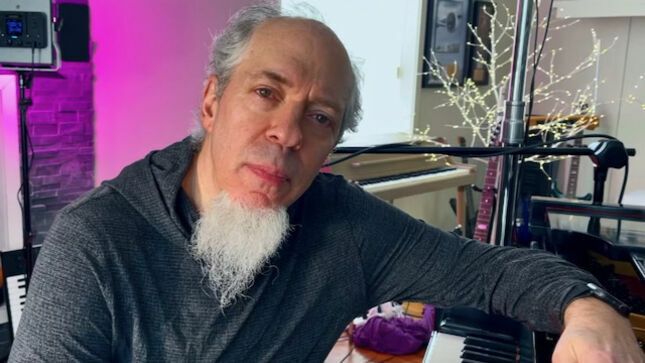 Doug Helvering, host of The Daily Doug, recently caught up with Dream Theater keyboardist Jordan Rudess. He shared the video interview, found below, accompanied with the following message:

"In this episode of The Daily Doug, I'm having a lovely conversation with keyboardist extraordinaire Jordan Rudess. On the day that we recorded this interview, the new Dream Theater album, A View From the Top Of The World, was released to the world. I was so privileged to have the opportunity to talk to the DT keyboardist about the new album, the recording process, his new technical gadgets and tools, and about some of his background and his own solo recordings.

Dream Theater's new album, A View From The Top Of The World, was released on October 22.

Dream Theater - comprised of James LaBrie, John Petrucci, Jordan Rudess, John Myung and Mike Mangini - was in the middle of a sold-out world tour in support of their last release Distance Over Time, and the 20th anniversary of Scenes From A Memory, when a Global Pandemic brought the world to a stop. The musicians found themselves at home with LaBrie in Canada and the rest of the group in the States. As fate would have it, they’d just finished construction on DTHQ (Dream Theater Headquarters) - a combination live recording studio, rehearsal space, control room, equipment storage, and creative hive. With LaBrie in Canada, he initially wrote with the band via ZOOM on a monitor in DTHQ. In March 2021, he flew down to New York, quarantined, and recorded his vocals face-to-face with Petrucci. The album ultimately threaded together lean and uncompromising hooks with tried-and-true technical proficiency.