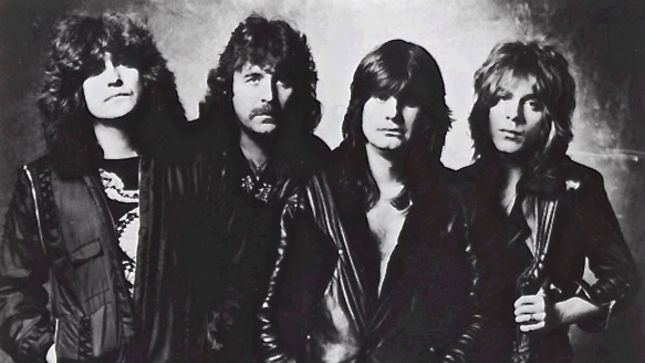 Jimmy Kay from Canada's The Metal Voice recently spoke to former Ozzy Osbourne and Uriah Heep drummer Lee Kerslake. He responded to Sharon Osbourne's recent claims that Ozzy Osbourne was always a  solo act in the early days and never a band  called Ozzy Osbourne's Blizzard of Ozz. She said (according to Celebrity Access Encore): "It was never a band. There's no way. It was Ozzy Osbourne."

Kerslake: "First of all Sharon, wasn't our manager at the beginning. Don Arden's son David was our manager for a time and he asked us what are we going to call the band? Then Bob Daisley said 'What about Ozzy Osbourne's Blizzard Of Ozz?'  So they went with that. The whole team at the office said yes and that was before Sharon came over and took over as the manager. I have the recollection that we spent quite a bit of time naming the band. Also, I wouldn't have joined Ozzy if it wasn't a band. I wasn't out of work. I was doing my own solo venture where I got a call saying you have got to join this band, so then I said I will audition them and they can audition me. After my audition was a success I said if we are a band then I am in. Then Ozzy said this band will never part. All I needed was Ozzy the singer, in his words, saying we were a band, and that's when we started working. "

On his upcoming documentary and interviews with KISS

Kerslake: "I had the most wonderful honour to see KISS. We asked the band through my director, producer Tayla Goodman of my documentary. She got in touch with their manager and the manager said 'I just spoke with Paul and Gene, and they both turned around and said without question anything Lee wants, he gets; we honour him cause he is a legend.' Then we had a long chat about the good old days. Also, they let me go see their show in the UK and they treated me like royalty. Then we did an interview with them. I would also like to mention that Ian Paice from Deep Purple and Joe Elliot have also been interviewed for my documentary and now we are waiting to catch up with  Nicko Mcbrain from Iron Maiden for an interview."

In the clip below, Kerslake accepts platinum discs and reads Ozzy Osbourne's letter to him at the Hall Of Heavy Metal History on January 23rd. Video provided by The Metal Voice.